Roundup of the second day of Euro 2020 action featuring action from Wales’ Group A clash against Switzerland as well as Group B which got up and running with two matches.

Wales entered the tournament off the back of a semi-finals appearance in 2016 but came up against tough competition against Switzerland, whilst Finland made their tournament bow in Denmark ahead of a tasty Group B clash between Belgium and Russia.

Now here is our roundup of the best action of all three games, although nightmarish for Denmark after their clash against Finland was suspended, following a shock collapse for Christian Eriksen.

A nervy first half saw Kevin Mbabu and Granit both put early shots wide as Switzerland made a bright start, with Kieffer Moore going close for Wales in the 15th minute from Daniel James’ cross only to suffer a minor head injury during the resulting corner.

Switzerland soon afterwards went up the other end with Fabian Schar putting a right heeled back flick wide from a corner kick, just moments before Haris Seferovic saw multiple shots go begging in the last 25 minutes of the first half as Switzerland finished the half brightly.

Vladimir Petkovic’s Rossocrociati eventually were rewarded for their efforts just four minutes into the second half, as Danny Ward punched Breel Embolo’s shot behind for a corner which the Borussia Monchengladbach striker headed in from close range.

Embolo then turned assistant as he teed up Mbabu who could only fire wide as Switzerland asserted their authority, with Aaron Ramsey going close for Wales in the 63rd minute as he curled a free-kick just wide of the top right corner.

Wales however found a huge equaliser 11 minutes later as a short corner was played into the box for Moore to nod in to level the scoring and set up a tense finish.

Swiss substitute, Mario Gavranovic looked to had won the game for Switzerland with five minutes left as he fired in from Embolo’s headed pass, only for VAR to rule his goal offside after he was adjudged to had moved forward too quickly beyond Wales’ defence to meet Embolo’s pass.

Gavranovic soon afterwards saw two shots go begging whilst Embolo had a header punched over by Danny Ward, as Wales clung on for a draw.

With the opening round of Group A matches now complete, Italy sit top after thrashing rock-bottom Turkey last night with Wales in second ahead of Switzerland. 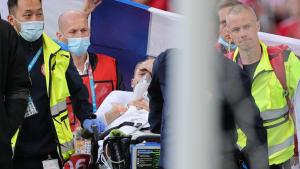 Martin Braithwaite made an excellent start for Denmark as he saw two shots denied in the opening minutes with Jonas Wind and Thomas Delaney also seeing early chances go begging.

Finland’s Lukas Hradecky however was in excellent form in goal as he went on to deny Pierre-Emile Hojbjerg, Christian Eriksen and others throughout a scrappy first half for his team.

First half proceedings however came to a scary end in the 43rd minute when Eriksen suddenly collapsed during a throw-in with medical assistance immediately sweeping onto the pitch, as his teammates formed a human shield whilst facing away as a respect of privacy.

Referee, Anthony Taylor suspended the match seven minutes later with play resuming around 100 minutes later from the 42nd minute following agreement of both teams, with Eriksen eventually ‘awake’ as he left the pitch and is now in hospital receiving treatment according to a statement from Denmark FA on Twitter.

After a five minute period of half time, the match resumed with a quieter second half as Denmark dominated much of the game.

Finland however were able to find a 59th minute winner as Joel Pohjanpalo headed in from close range with Kasper Schmeichel fumbling his save to let the ball fall into the goal, although Denmark missed a 74th minute opportunity to snatch an equaliser.

Yussuf Poulsen was fouled by Paulus Arajurri inside the box but Hojbjerg couldn’t get enough power on his spot kick, as Hradecky dived correctly to his left to stop the shot finding the bottom right corner with Finland eventually clinging on for their maiden win on their Euros debut.

A nervy start saw both teams create no proper chances of note until Romelu Lukaku pounced on an uncleared pass and fired in on the turn to give Belgium a tenth minute lead.

Mario Fernandes four minutes later saw a potential equalising header saved by Thibaut Courtois with Leander Dendoncker then wasting an opportunity to double Belgium’s lead, rifling over from Lukaku’s pullback on the counter-attack.

Timothy Castagne soon afterwards was substituted for Belgium with a suspected head injury following a clash of heads with Daler Kuzyaev, who too was substituted just minutes after the Belgian.

Castagne’s replacement, Thomas Meunier went on to double Belgium’s lead and seal an eventual 2-0 win, as he fired in on the rebound after Thorgan Hazard’s cross was spilled by Anton Shunin.

Russia went on to produce a series of chances throughout the second half with Roman Zobnin seeing two chances denied, as Belgium dug deep defensively until Meunier unleashed a 88th minute through ball for Lukaku to chase and fire in to ensure victory as Belgium went top of Group B.

Finland therefore slotted into second in the group ahead of Denmark who sit above Russia who occupy the last spot on goal difference.