Nine of this season’s teams returned for the test alongside newcomers – Van Amersfoort Racing who are replacing HWA Racelab next season, as 16 rookies got to test F3 machinery for the very first time including 2021 GB3 champion – Zak O’Sullivan.

Now, here is a full roundup of all three days of post-season testing along with overall timings for each individual day.

Teams were met with a wet track on the opening morning of this three-day test but MP Motorsport rookie, Franco Colapinto quickly set the early pace until fellow rookies, Zane Maloney and Gregoire Saucy began scrapping over the top position for Trident and ART GP respectively.

Conditions continued to improve throughout the break with the afternoon session held in completely dry conditions, as MP Motorsport led the way with Caio Collet heading the order in the early stages of the session.

Times however continues to tumble and it was eventually Doohan who emerged fastest overall on Day One ahead of Martins, Saucy, Maloney and Roman Stanek who rounded out the top five with all fastest times of the opening day set in the afternoon session.

Day Two began with several driver changes as Paul Aron replaced Arthur Leclerc at PREMA as the Monegasque dropped onto the sidelines, whilst Oliver Rasmussen moved from Charouz to ART GP.

Campos’ David Vidales and Trident’s Stanek set the initial pace with 1m 21.723 but was displaced by Saucy who posted 1m 21.447 to go top.

Jak Crawford eventually emerged quickest of the morning session with 1m 21.368 ahead of Saucy and Stanek as Hitech GP’s Johnathan Hoggard caused the first red flag of the test, as the Brit grinded to a halt on track with an issue just after Crawford set his fastest lap.

Several drivers proceeded to spend the afternoon session focused on data gathering but Colapinto and PREMA’s Paul Aron were the only drivers to improve their fastest overall times after lunch, as Crawford ultimately finished day two fastest ahead of Saucy by 0.079 seconds. 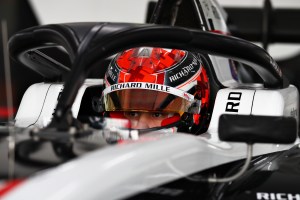 VAR had a double driver change as Aleksandr Smolyar and Filip Ugran replaced Rafael Villagomez and Reece Ushijima, with the latter instead driving for Campos as Villagomez sat the day out.

Brad Benavides returned to Carlin in place of Ido Cohen who switched to Jenzer in place of Nazim Azman, who filled Ugran’s seat at Charouz.

Once the morning session began, everyone quickly headed out with MP Motorsport’s Collet and Colapinto setting the initial pace, until Smolyar caused a red flag after stopping out on track.

When the session resumed, Saucy proceeded to set the fastest time of the day with a 1m 21.300 as Collet ultimately settled for the second quickest time ahead of; Doohan, Stanek and Colapinto who round out the top five.

PREMA’s Oliver Bearman and Campos’ Josep Maria Marti however caused further red flags before everyone shifted focus to data gathering throughout the rest of the morning, which was followed by long run race simulations with Doohan setting the fastest afternoon time.

There however were one last red flag after the lunch break to bring the 2021 running in F3 to a close as Carlin’s Brad Benavides grinded to a stop out on track.