Victory would see Estonia stay fourth but potentially move to within a point of Wales and Czech Republic and the fight for the Play-Off spot.

Wales meanwhile know that if Czech Republic slip up in their match against Belarus, they can move into second with a point at minimum but victory would put their destiny into their own hands in that scenario. 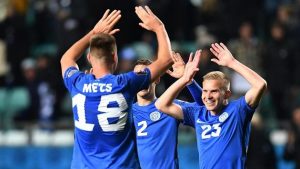 Estonia have no fresh injury concerns to report as Michael Lilander and Martin Miller remain ruled out after withdrawing from Friday’s win over Belarus with unspecified injuries.

Wales have no fresh injury concerns but Wayne Hennessey could start in goal after Danny Ward made a blunder in Friday’s 2-2 draw against Czech Republic in Prague.

Harry Wilson and Sorba Thomas could also be named in the starting eleven if Rob Page decides to rotate his squad, as well as possibly change formation after lining up in a 5-3-2.

Having found form over the summer with three wins, Estonia dropped their form last month but did incredibly well to hold Wales last month with a disciplined defensive performance, before kicking on with a clinical win over Belarus on Friday.

Wales meanwhile will be disappointed with Friday’s 2-2 draw in Czech Republic in which they wasted numerous chances, as well as make sloppy defensive mistakes which almost proved costly despite finishing the match on the front foot with strong spirit.

This though will be another tough test for Wales because Estonia are a team that clearly cannot be underestimated, yet this could be a close away win if Wales can pick up where they left off and are able to dictate this game with strong defending and clinical attacks.