Mercedes’ Lewis Hamilton is bemused by his “frustrating 2021 Turkish Grand Prix, despite having mounted a comeback drive to finish fifth.

Hamilton dominated Friday Practice and Qualifying but took a ten-place grid penalty as a result of changing his Internal Combustion Engine, which meant that he started 11th on the grid.

A solid start saw him quickly climb up to fifth by the end of Lap 14, before running long on his first set of intermediates which put him third with eight laps left when Mercedes decided to pit him for safety reasons as he eventually finished fifth.

Despite feeling that the decision to pit was “frustrating”, Hamilton explained the decision to change tyres, as he said: “Strategy calls in conditions like today can be so tough. I’m naturally a risk-taker and being third, I was aiming to miss the stop when everyone pitted for new Inters, hopeful that I could get the opportunity to switch to slicks later and gain some good positions.

“Then the team made the call to come in and you have to rely on your team, accept the choices they make and hope it’s the right one – as I always say, we win as a team and we lose as a team.”

Hamilton though is pleased with the performance of his car and cannot wait to push on in his title fight against Max Verstappen, as he commented: “Overall, the car was great this weekend and Valtteri did a great job today. If we can continue to perform like that over the next few races, we’ll be in a good position come the end of the season.”

Mercedes’ Team Principal, Toto Wolff echoed Hamilton’s remarks by admitting that the team took “difficult decisions” throughout the 58 lap race, having decided to gamble on leaving Hamilton out to the checkered flag on intermediates unless the track dried enough for soft tyres.

Explaining the choice that the team faced in terms of strategy, Wolff said: “The balance for us therefore was between pitting, taking it conservatively and fighting with Leclerc and Perez on track for P3 or, by taking a calculated gamble, have a chance to win the race or finish P3.”

Wolff added that Ferrari’s Charles Leclerc had also struggled after going longer than other drivers, which forced their decision to pit Hamilton, thus settling for fifth in the end which put Hamilton six points behind Verstappen. 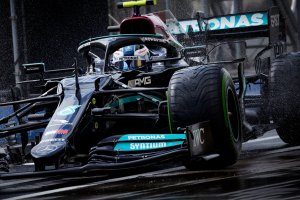 Valtteri Bottas meanwhile enjoyed a comfortable race from pole position to clinch his first victory in 378 days since 2020 Russian Grand Prix, despite briefly losing the lead to Leclerc during the pit stops.

Reflecting on his dominant win to end a 22-race winless run, Bottas said: “Today was probably one of the best races I’ve had ever – apart from that one little slide, everything was under control. The car has been fantastic in every possible condition this weekend and I had great confidence with it.”

The out-going Mercedes driver however admitted that it was “not easy to choose the strategy” in difficult conditions where the track wasn’t dry enough for slicks yet too dry to run the intermediates properly.

Bottas also noted that he felt that one mistake could of ended his race due to a single drying line, adding: “When there’s only one drying line it doesn’t take much for you to go off, you need maximum focus all through the race and so today feels like a well-earned victory.”