Formula One returns to the Nurburgring after a six season absence for the newly titled Eifel Grand Prix as Lewis Hamilton looks to match Michael Schumacher’s all-time record of 91 race victories on the German’s home soil.

Hamilton continues to lead the drivers’ championship despite Mercedes’ teammate, Valtteri Bottas cutting his lead down to 44 points after taking victory in Russia last time out, whilst there is a raging battle for third in the Constructors’ standings as seven points separates McLaren, Racing Point and Renault with Ferrari a further 25 points back in sixth place.

This weekend meanwhile sees Mick Schumacher and Callum Ilott make their F1 debuts as they drive for Alfa Romeo and Haas respectively in FP1 only, having both impressed throughout the 2020 F2 season.

Now here is a full lowdown on everything which you need to know ahead of the 2020 Eifel Grand Prix. 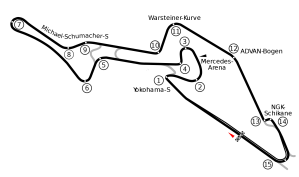 If missed any of the ten previous rounds of the 2020 season, please click on the links below to catch up on the missed action.