Lewis Hamilton dominated the 2020 Hungarian Grand Prix to take a eighth win around the Hungaroring circuit and take the championship lead.

Hamilton only conceded the lead for one lap as he dominated the field despite damp conditions at the race start, finishing 8.807 seconds clear of Max Verstappen who survived a pre-race crash at turn 12 to comfortably finish second.

Speaking post race on his win to Martin Brundle, Hamilton spoke about how he pushed throughout the race, saying; “Believe it or not we were still pushing out there, particularly for the fastest lap in the end but also management. Huge congratulations and thanks to the people back home in the factory. The guys have done such a fantastic job.”

Valtteri Bottas rounds out the podium after fighting back from a poor start and an early battle against Racing Point’s Lance Stroll, who finished fourth ahead of Alex Albon completing the top five. 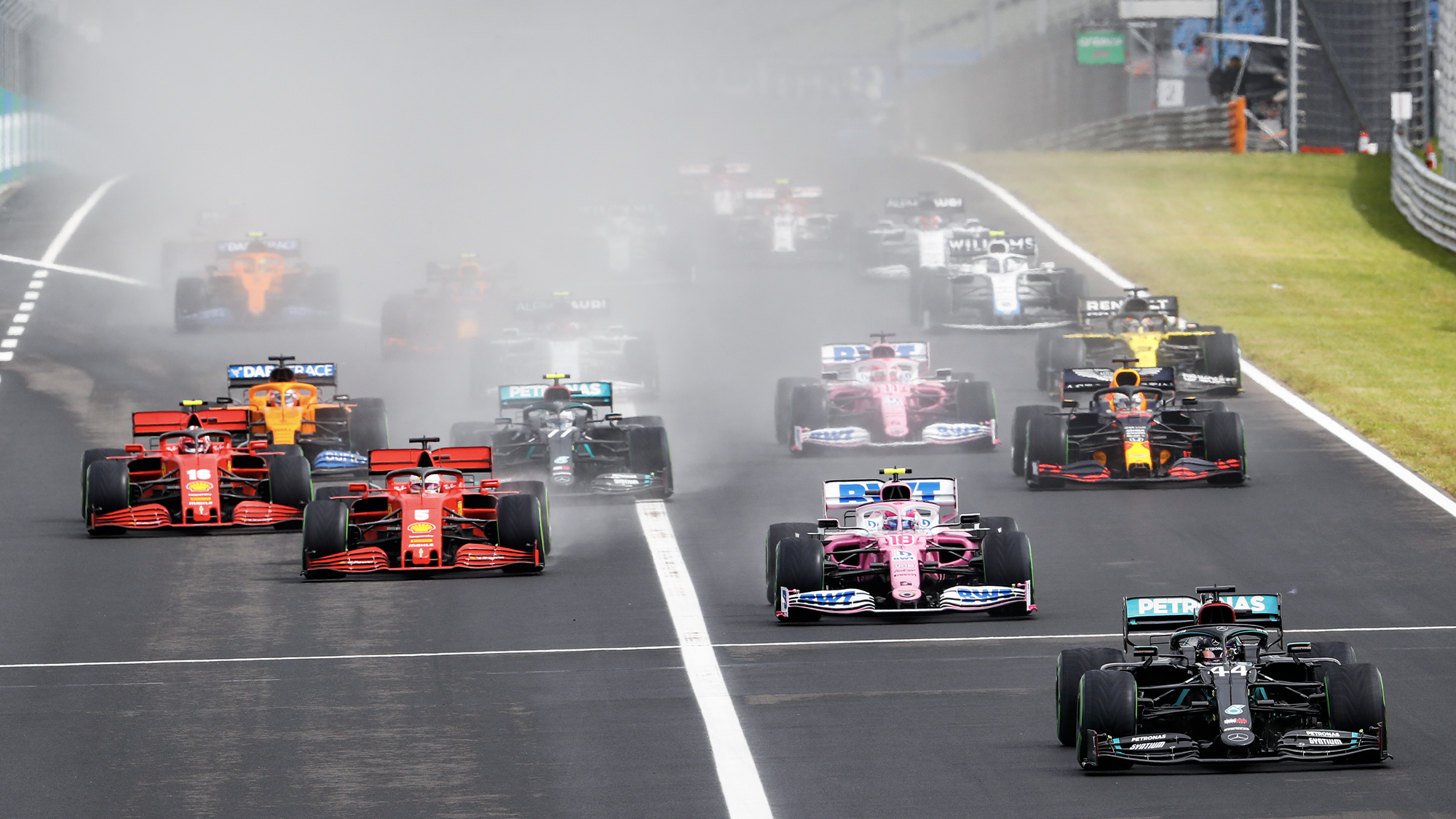 A heavy rain shower just 90 minutes before the race left the track in damp conditions, catching a few drivers out on their way to the grid with Verstappen coming off worse when he lost the rear at turn 12 and slid into the barrier and broke his front wing.

Red Bull mechanics managed to repair the damage just prior to the race start, allowing Verstappen to make a great start to slot into third behind Hamilton and Stroll, as Bottas and Sergio Perez made poor getaways as almost everyone started on intermediate tyres.

Both Haas drivers – Kevin Magnussen and Romain Grosjean however started from the pit lane after pitting for slick tyres, slotting into third and fourth after everyone else pitted between laps three to five with Verstappen overcutting Stroll by pitting on lap five.

Williams’ Nicholas Latifi endured a torrid afternoon when he suffered a puncture from Carlos Sainz after his first pit stop, earning himself a five second time penalty for an unsafe release before a late race spin at turn five as his front left touched wet grass.

Stroll soon reeled Grosjean in and took fourth on lap seven with a late move into the first corner.

Bottas battled Charles Leclerc early on and eventually got past on lap ten, as Leclerc struggled for rest of race on soft then hard compounds whilst holding up various drivers battling for points throughout the race en route to finishing a lap down in 11th position.

Gasly retired in the pits at start of lap 16 with drivetrain issues which ended a miserable weekend for the Frenchman, who had battled Honda power unit issues all weekend.

Leclerc soon got caught and passed by Albon and Sebastian Vettel on what he described over team radio as “rubbish” soft tyres, before eventually pitting for hard tyres to the flag, following fiery battles against both McLarens of Lando Norris and Carlos Sainz.

Hamilton however was so dominant that at one point, he led Verstappen by more than 25 seconds whilst lapping everyone but the top five finishers, whilst having time for a late pit stop to fit softs and secure the fastest lap point.

His eighth win around Hungary also means that Hamilton equals Michael Schumacher’s record of eight victories at a single circuit, as the German won the French Grand Prix on eight occasions between 1994 and 2006.

Hamilton consequently takes the championship lead from Bottas by five points as F1 takes a fortnight break ahead of two races at Silverstone then the Spanish Grand Prix in a second triple header.

Mercedes continue to lead the constructors’ standings as Red Bull moved above McLaren into second place, albeit with a 66 point deficit to the Silver Arrows as Racing Point remain fourth and 13 points clear of fifth placed Ferrari.