As questions linger around Sir Lewis Hamilton’s future in Formula One, here are three reasons why he should fight on in 2022.

Having hinted that he could be considering his future after remarking “We’ll see about next year.” after losing out on a historic eighth title in Abu Dhabi after a farcical climax triggered by FIA Race Director – Michael Masi, Hamilton is now at a huge crossroad in his F1 career.

Just weeks away from turning 37 years-old and with new technical regulations coming into effect next season, Hamilton is definitely in the twilight years of his F1 career and could deservingly walk away on his own terms as an icon of the sport.

There however has been a worldwide outpouring of support for Hamilton in the ensuring fallout to fight on and chase a record eighth title, with further history making, fresh rivalry at Mercedes and a defiant message certainly amongst motivational reasons to race on in 2022.

Now here are three reasons why Hamilton should fight on in F1 next season to overturn the pain of Abu Dhabi into a blip in the history books.

Following a controversially “manipulated” cruel ending to the 2021 season, Hamilton still has history within his sight as next season sees a regulation overhaul and a chance for the Brit to become a record-breaking EIGHT-TIME F1 Champion.

Although the climax in Abu Dhabi will feel hard to swallow for a long-time if not forever, Hamilton certainly has won the hearts of many F1 fans around the world which should psychologically fire him up to go and chase an historic eighth title no matter how dirty the FIA play.

Away from talks of an eighth title, there are still plenty of different records that Hamilton can still hunt down next season.

Now that is just several of records which Hamilton could break with a fair number of records either held or shared with Schumacher, which should serve as a motivation to go and smash those records just to make a point to the FIA that he won’t be beaten even if he is denied an eighth title again. 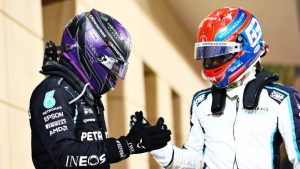 If the heartbreak of Abu Dhabi isn’t enough motivation alone, Hamilton will definitely be fired up by fresh rivalry at Mercedes with George Russell replacing Valtteri Bottas next season.

Russell though has already shown at Williams and even in GP3/F2 that he isn’t afraid to get feisty when needed with blunt honest verbal truths, which is a fresh impetus that Hamilton needs to race harder than he has done in recent seasons with Bottas as his wing-man..

Harder racing within Mercedes from Russell therefore might be just what Hamilton needs in order to raise his game to new levels and push for that eighth title, which should hopefully enable him to match Verstappen on track in terms of trickery with Russell also getting in on the scrap.

Now if that is the case then we should hopefully see a return of vintage aggressive Hamilton which often hasn’t been the case at times in recent seasons, especially with Russell set to apply strong pressure as his teammate which could cause issues for Verstappen against the pair.

Having often found himself on the end of difficult stewarding decisions at times throughout his F1 career, there is no doubt that the cruel end in Abu Dhabi will hurt more than any other decision which had gone against the Brit over the years.

Wind back to 2011 and Hamilton found himself in various tricky situations with the stewards, especially early on in that season which culminated in three penalties in two days in Monaco thus leading to a controversial post-race remark: “Maybe it’s because I’m black. That’s what Ali G says. I don’t know.”

Although he apologised for that remark, Hamilton has since gone on to break boundaries in terms of BAME sporting achievements and tackling racism, which hasn’t exactly sat well at times with Masi and FIA in the last two seasons especially following the launch of ‘We Race As One’ campaign and kneel.

Following Hamilton’s decision to wear a t-shirt on podium at 2020 Tuscan Grand Prix stating ‘Arrest The Cops Who Killed Breonna Taylor’ to raise awareness of racial violence of US Police in America, Masi and FIA issued a new rule regarding prohibition of non race suit attire on podiums.

FIA and Liberty Media in pre-season this year proceeded to further widen the reach of the ‘We Race As One’ campaign beyond racism, instead broadening the concept out to cover other social and environmental issues.

Many fans have also fairly questioned the stewarding attitudes this season between Verstappen and Hamilton in relation to several incidents;

It is therefore noticeable that there had clearly been weak stewarding and disciplinary decisions in favour of Verstappen, which was evident in horrific negotiations between Red Bull and FIA across radio screened live to billions of fans around the world.

Unconscious racial bias therefore rings to mind here following various individual moments across last two seasons, which has certainly piqued the thoughts of many F1 fans especially across Social Media with ‘racism’ often banded around in the fallout of the Abu Dhabi race.

One therefore surely has to wonder whether Hamilton deep down could be thinking the same but if Masi and FIA aren’t to win in this mess, Hamilton needs to send a defiant message by racing on in 2022 and targeting that eighth title plus every record possible.

Now if he does continue in F1 then F1 teams, drivers, media and fans are in for a fiercely competitive season at the top, yet if he chooses to retire then he is leaving on his own terms as a legend with applaudits and respect from across motorsport.