With qualification as Group F winners already finalised, Man Utd are playing for pride as they continue to adapt to life under Ralf Rangnick.

Young Boys however can secure Europa League football with victory if Atalanta lose to Villarreal elsewhere. 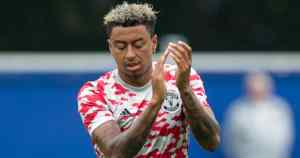 Jesse Lingard is a for Man Utd after a muscle injury forced him to miss Sunday’s Premier League win over Crystal Palace.

Young Boys will be missing Ulisses Garcia after the defender suffered a calf injury against Zurich in late November.

Having blown an early lead in Bern in September, Utd cannot afford to come here underestimating Young Boys, especially given that this Swiss team has caused United’s fellow Group G opposition some difficulty but Rangnick can take heart from a spirited clinical home win on Sunday.

Young Boys’ away form in this group however has been disappointing with two defeats and are winless in their last five away games in all competitions, yet are still in with a shot of Europa League football so I expect them to go for the win here.

Utd though will be eager to continue their progress under Rangnick because they looked more confident on and off the ball against Palace than they have done for much of the season, yet he will be rotating his squad to give fringe players a shot so I wouldn’t be surprised if it’s a draw.