Formula One have released all-new driver ratings as part of F1 2020 Official Game, with Lewis Hamilton coming out on top overall.

In a format similar to that of the popular card game – Top Trumps, the drivers have been rated across four categories; experience, racecraft, awareness and pace.

Alfa Romeo’s Kimi Raikkonen came out on top in the experience stakes with a rating of 98, ahead of Hamilton and Ferrari’s Sebastian Vettel.

Down at the bottom end, Nicholas Latifi produced the lowest rating with a 32, ahead of Antonio Giovinazzi who scored 47.

Red Bull’s Max Verstappen achieved the highest driver rating in the racecraft category, having scored a 94, just edging out Hamilton and Charles Leclerc.

Mercedes’ Valtteri Bottas scored a perfect 99 in the awareness rankings, compared to teammate – Hamilton’s 95 and Raikkonen who scored 91.

Giovinazzi, Kevin Magnussen and Daniil Kvyat however were judged the least race aware drivers, with the Italian scoring 70 and Magnussen drew with Kvyat on a rating of 73.

Hamilton and Verstappen meanwhile were tied in the ‘Pace’ rankings with a score of 96, whereas 2020 rookie – Nicholas Latifi only scored 64.

In the ‘Overall’ rankings, the returning 18 drivers from 2019 all finished in last season’s championship order with Hamilton scoring the highest with a rating of 94, whilst Bottas and Verstappen both scored 90 points.

Down at the bottom, Latifi had the lowest overall rating of 64 due to having little F1 experience – aside from occasional Free Practice One runs, ahead of Giovinazzi who scored a rating of 73.

Formula Two drivers have also been rated and these ratings will affect each driver’s individual performance within the 2020 game, on top of helping players to unlock various features and technical upgrades.

These ratings are based on real-world data and will affect the career mode plus ‘My Team’ functionality, in which players can create their own F1 team and choose which driver will be their teammate in the game.

F1 2020 Official Game will also include two new circuits in Hanoi and Zandvoort, despite the latter race being cancelled due to the Coronavirus pandemic.

How Does Driver Rating Work? 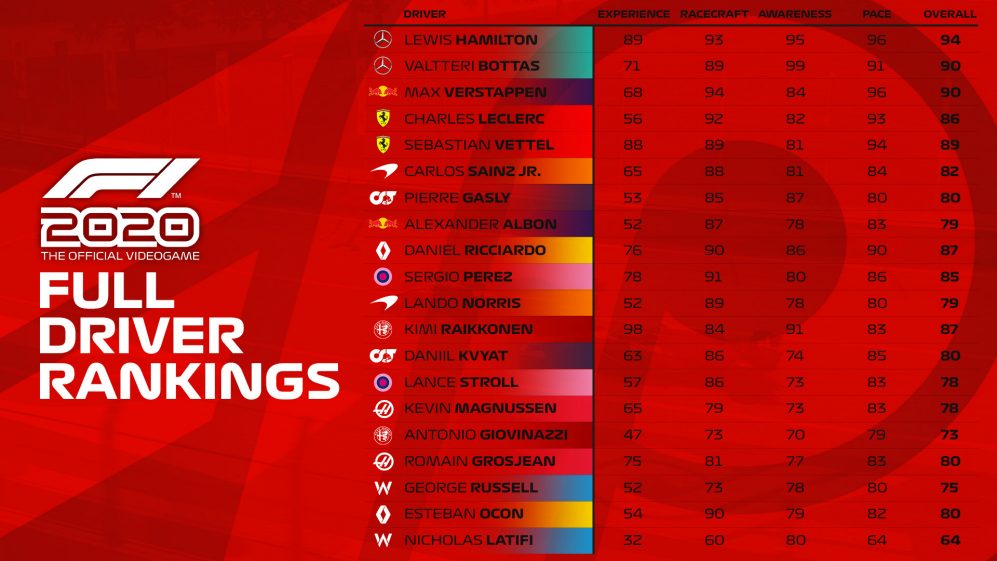 There are four categories; experience, racecraft, awareness and pace in which the drivers are rated out of 100, so here is how those ratings in each category will affect in-game performance.

In the ‘Experience’ category, drivers are rated on their F1 experience in terms of years and can be used within the game to buy car upgrades through ‘Resource Points’.

The ‘Racecraft’ rating will determine how effective the driver can perform overtakes within races.

Gaining a high rating in ‘Awareness’ category will allow the driver to maintain more control of the car when the racing gets tough.

A high rating within the ‘Pace’ category will allow the driver to be more rapid throughout a race.