From emerging young talent to a potential rise of a fallen giant and two major tournaments amongst various potential footballing tales, here are three stories to watch out for in 2022.

From a tight Premier League title fight to realistic opportunities for a cup treble for Chelsea or Liverpool to various promotion battles down the footballing pyramid, there isn’t a shortage of potential stories across English football.

There are also two major international tournaments taking place in 2022 as England host Women’s Euros before the Three Lions head to Qatar for the 2022 FIFA World Cup, which offers a huge opportunity for a title double across both sides of the beautiful game.

Now here are three stories which you should watch out for across the entirety of 2022. 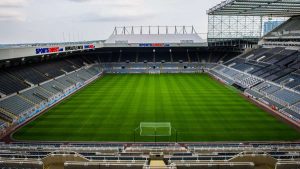 With a rich Saudi-led consortium now in charge at St James’ Park, 2022 certainly promises to be an interesting year for Newcastle United as the Magpies look to rise back to the top of English Football.

Eddie Howe’s Magpies currently have a Premier League relegation battle on their hands but with transfer funds available in January’s transfer window, anticipation is rife around which players could be heading to Tyneside in 2022.

Getting the right quality signings and improving performances to secure survival though is going to be key, if Newcastle are to slowly but surely turn into a title challenging team within the next few seasons which will be an interesting journey to watch throughout the year.

Leicester however showed in 2015-16 that a team can go from relegation contenders to title challengers which creates additional excitement at the prospect of how far Newcastle will rise across 2022 if they make the necessary progress quickly.

Co-owner, Amanda Staveley meanwhile warned fans shortly after the takeover was completed in October that patience would be required, as she said: “Change does not always happen overnight, it demands time and that we follow a carefully considered plan and strategy.”

Relegation though would surely spice up those plans and make Newcastle a team to be feared in the Championship with a huge transfer kitty to boot, especially in terms of chasing an instant promotion back to the Premier League.

With that in mind, football fans certainly should keep an eye on Newcastle because they will be a team to watch not only on the pitch but in the dressing room too, with changes afoot in what could be the rising of a new golden era for the Magpies.

Due to the Coronavirus pandemic delaying both the men and women’s UEFA Euros by a year, England now have a rare chance at a shock international double of Women’s Euros and 2022 FIFA World Cup glory.

England Lionesses head into the Women’s Euros on home soil in fantastic form under the new management of Sarina Wiegman, having gone unbeaten with 53 goals in six matches under the watch of Wiegman who had guided Netherlands to title glory in 2017 on their home turf.

These Lionesses also will have the added psychology of having seen how their male counterparts dealt with home expectations last summer, especially in terms of breaking England’s semi-final hoodoo which is a common theme across both senior teams as they know well.

Now if the Lionesses were to go all the way and lift the trophy then the pressure will be on Gareth Southgate’s Three Lions to roar their way to FIFA World Cup glory, now that they will be more experienced and know how to handle the big occasions.

One additional advantage for the Three Lions is that the World Cup falls during the middle of the domestic season, so there will be little excuses for fatigue because these players should be in fine form heading into the tournament ready to take on giants like Brazil, Italy and Argentina.

Add in the fact that there will be very little opportunities for international friendlies this year which should hopefully benefit England, especially in terms of understanding where they stand competitively heading into the tournament.

Heat though will be a huge challenge for all teams in Qatar so adaptability will be key because if England can adapt to the hot environment quickly with little issues, there is no doubt that they will be amongst the hot favourites.

Quite frankly though, I am excited for both tournaments and the rare opportunity for a title double across Lionesses and Three Lions within same calendar year is something to saviour from a fan perspective and dream about.

Women’s Euros will be held between 6-31 July  in England, whilst the FIFA World Cup takes place from 21 November – 18 December in Qatar.

Emergence of the Youth

2021 saw several youngsters like Aaron Ramsdale, Ella Toone and Emile Smith Rowe make their international breakthroughs, whilst Trevoh Chalobah, Jess Park and Carney Chukwuemeka are amongst those to make their breakthroughs at club level across men and women’s game.

Now if this year can see more top quality talent like Harrison Ashby, Samuel Edozie and Ginny Lackey coming through into first teams at various clubs, we could well see exciting battles at both club and international levels for starting positions.

These new emerging young stars therefore will provide plenty of excitement for the future of the homegrown game, yet if English clubs are producing exciting youngsters now then 2022 could be a massive year for youngsters looking for first-team opportunities.

Add in the opportunity to chase places within England squads for Women’s Euro and Men’s World Cup then this year could well have more impotent motivation than ever before, in order to drive youngsters forward in their game and create tough questions over tournament selections.