After 1,298 laps across 21 races and three Sprint Qualifying races, it all comes down to the wire as Max Verstappen faces Lewis Hamilton for the 2021 F1 crown, so here is our big preview for 2021 Abu Dhabi Grand Prix.

Following a dramatic inaugural Saudi Arabian GP, Verstappen and Hamilton enter this decider locked level on 369.5 points which sets up a winner takes all clash under the lights of Yas Marina as either the first Dutch or record-breaking eight-time champion is crowned.

Mercedes meanwhile are on course of an eighth consecutive constructors title but Red Bull still have an outside shot of the title, thereby setting up a titanic showdown on both fronts between the two most recent constructor champions.

Elsewhere, there is a double farewell at Alfa Romeo as Antonio Giovinazzi and Kimi Raikkonen both bow out of F1, whilst Valtteri Bottas and George Russell say goodbye to their current teams ahead of moves to Alfa Romeo and Mercedes in 2022 respectively. 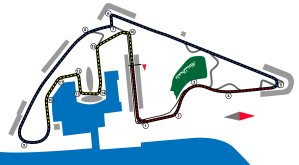 With Verstappen and Hamilton both locked on 369.5 points apiece after 21 races, whoever finishes ahead of the other driver will be crowned champion.

Should either driver finish ninth with the other driver placing tenth with the Fastest Lap point, Verstappen would be crowned champion on countback with his nine race wins to Hamilton’s eight victories.

If neither driver finish in the top ten, Verstappen is champion by virtue of his one extra win than Hamilton this season.

Mercedes meanwhile will seal the constructors’ title if they score 17 points regardless of what Red Bull achieve.

If missed any of the 20 previous rounds of the 2021 season, please click on the links below to catch up on the missed action.