Roundup of the opening matchday of UEFA Qualifying for 2023 FIFA Women’s World Cup.

England began their Qualifying campaign under new management as Sarina Wiegman finally took charge,  with the Lionesses, Northern Ireland, Scotland and Wales all enjoying clean sheets in their opening matches.

Elsewhere, Spain, Norway and France enjoyed ruthless victories with 30 goals scored between the trio in a goal fest lowdown of the opening round of UEFA Qualifying for 2023 FIFA Women’s World Cup, which will take place in Australia and New Zealand in Summer 2023.

Fridolina Rolfo’s 10th minute goal proved enough to seal victory for Sweden in Slovakia, as Republic of Ireland’s trip to Georgia was postponed due to travel restrictions as a result of the Coronavirus pandemic.

Finland meanwhile weren’t in action due to this group containing five teams, meaning that they missed the opening pair of group fixtures by default. 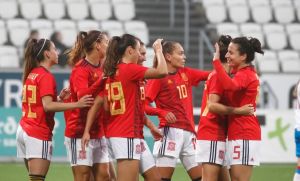 Amaiur Sarriegi produced four goals in a dominant TEN GOAL away mauling of Faroe Islands as Spain went top of Group B.

Scotland sit second after goals from Erin Cuthbert and Martha Thomas wrapped up a 2-0 away win over Hungary in Budapest.

Anna Kozyupa, Anastasia Shuppo, Anna Pilipenko and Anastasiya Shlapakova all struck in a 4-1 home win for Belarus over Cyprus to put them top of Group C.

Netherlands found themselves held at home by Czech Republic in a surprise 1-1 draw in Groningen, as Vivianne Miedema’s late strike cancelled out Andrea Staskova’s opener to snatch a point for the 2019 FIFA Women’s World Cup runners-up.

Austria sit second after Katja Wienerroither’s late brace completed a ruthless away comeback to batter Latvia 8-1, after Viktorija Zaicikova had put the Latvian team ahead after just 12 minutes.

Sladana Bulatovic’s 60th minute penalty winner sealed a 3-2 away victory for Montenegro in Bosnia & Herzegovina, after Armisa Kuc’s early brace for the visitors was cancelled out by Melisa Hasanbegovic and Milena Nikolic in the opening 20 minutes.

Janice Cayman’s 79th minute equaliser saw Belgium come from behind to snatch a draw in Poland after Ewa Pajor had put the Polish team ahead in Gdansk, which in turn created a four way tie for second on points.

Kosovo however ended up second in Group F standings after defeating Belgium in a disciplinary tiebreak, having avoided any bookings whereas Belgium had three players yellow-carded in Poland who sit fourth above Albania on virtue of their higher UEFA Coefficiency points tally.

Alisha Lehmann, Coumba Sow, Ramona Bachmann and Svenja Folmli netted for Switzerland who went top of Group G with a 4-1 win over Lithuania in Thun.

First-half goals from Laura Rus and Cristina Carp put Romania third after claiming a 2-0 win at home over Croatia.

Jessica Silva rescued Portugal a point in a 1-1 draw against Turkey in Alanya after cancelling out Yagmur Uraz’s opener.

Serbia’s clash with Israel was postponed until April 2022, in turn meaning that the former’s trip to Turkey has moved to February 2022, whilst Bulgaria’s clash against Israel in Matchday Two will now be played in June 2022.