Roundup of the fifth round of UEFA qualifiers for 2022 FIFA World Cup, as England, Republic of Ireland, Scotland and Wales all featured in action.

England comfortably dispatched Andorra to remain top of Group I whilst Scotland, Wales and Republic of Ireland all looked to boost their qualifying hopes.

Now here is a full roundup of how the latest action unfolded across all ten groups featuring Italy, Belgium and Germany amongst others.

Serbia regained top spot in Group A after thrashing Luxembourg 4-1 in Belgrade, as Aleksandar Mitrovic netted twice, before a late own goal from Maxime Chanot and injury-time strike from Nikola Milenkovic sealed victory for the hosts.

Shane Duffy’s 87th minute header saved Republic of Ireland an embarrassing home defeat against Azerbaijan, after Emin Mahmudov put the visitors ahead in first-half injury time in an eventual 1-1 draw in Dublin.

Second-placed Portugal were in friendly action as they thrashed Qatar 3-1 in Debrecen, Hungary, as Andre Silva, Otavio and Bruno Fernandes all got on the scoresheet.

Spain bounced back from Thursday’s loss to Sweden as they comfortably dispatched Georgia 4-0 in Badajoz, with Jose Gaya, Carlos Soler, Ferran Torres and Pablo Sarabia all on the scoresheet to return to the Group B summit.

Vedat Muriqi’s 93rd minute equaliser cancelled out Anastasios Douvikas’ first-half injury time opener as Kosovo fought back to hold Greece to a 1-1 draw in Pristina, with both teams sat third and fourth.

Italy remain top of Group C but found themselves held to a goalless away draw in Basel by second-placed Switzerland.

Ivaylo Chochev struck a 82nd minute winner as Bulgaria climbed to third after snatching a narrow home win over Lithuania.

For the second consecutive match, France came from behind to snatch a 1-1 draw and remain top of Group D, as Anthony Martial cancelled out Mykola Shaparenko’s opener for Ukraine in Kiev.

Joel Pohjanpalo’s 60th minute strike handed Finland a narrow win over Kazakhstan as The Eagle-owls put themselves up to second in the group.

Belgium stretched their lead to six points at the summit of Group E after Romelu Lukaku provided a goal and assist in a dominant 3-0 home win over Czech Republic.

Gareth Bale’s hat-trick saw Wales fight back to defeat Belarus 3-2 on neutral territory in Kazan, Russia, which lifts the Welsh Dragons up to third.

Rock-bottom Estonia weren’t in competitive action as they instead lost 1-0 to Northern Ireland in a friendly clash, as Shane Ferguson netted a 75th minute winner for the Irish. 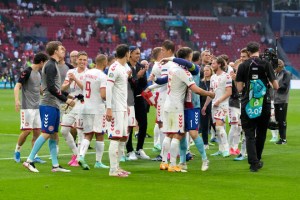 Jonas Wind struck a 85th minute winner against the Faroe Islands as Denmark made it five wins from five qualifiers to sit top of Group F unbeaten.

Eran Zahavi struck twice as Israel thrashed Austria 5-2 in Haifa to climb to second and put themselves five points behind the Danes.

Netherlands remain a point behind in second-place after Memphis Depay’s brace alongside strikes from Georginio Wijnaldum and Cody Gakpo proved enough to thrash Montenegro 4-0 in Eindhoven.

Russia moved top of Group H on virtue of goals scored after goals either side of half-time from Aleksandr Yerokhin and Rifat Zhemaletdinov defeated Cyprus away in Nicosia.

Croatia consequently dropped to second after Marcelo Brozovic struck a 86th minute winner for the 2018 World Cup runners-up to defeat Slovakia in Bratislava.

Slovenia climbed to third after Sandi Lovric’s penalty on the stroke of half-time proved enough to beat Malta in a closely fought match.

England thrashed Andorra 4-0 at Wembley Stadium to remain unbeaten at top of Group I as Jesse Lingard netted a brace, scoring either side of Harry Kane’s penalty before Bukayo Saka headed in a 85th minute goal to seal the rout.

Poland climbed to second and sit five points behind England ahead of their crunch showdown on Wednesday, following a ruthless 7-1 away win in San Marino as Adam Buksa delivered a hat-trick whilst Robert Lewandowski netted twice and Karol Swiderski plus Karol Linetty also scored

Armando Broja’s 87th minute winner handed Albania a late home victory over Hungary as they climbed above their visitors into third.

Germany climbed to the top of Group G after Serge Gnabry netted twice in a 6-0 mauling of Armenia at home in Stuttgart, with Chelsea’s Timo Werner amongst four other goal scorers.

Late goals from Brynjar Bjarnason and Andri Guojohnsen saw Iceland fight back to snatch a 2-2 draw at home to North Macedonia, after goals from Darko Velkovski and Ezgjan Alioski either side of half-time saw the visitors initially hold a two goal lead after the 54th minute.

Romania consequently moved above North Macedonia into third after goals from Alin Tosca and Cristian Manea secured a 2-0 home win over Liechtenstein.