As Formula One resumes its 2021 season at Spa Francorchamps, here is everything that you need to know ahead of the 2021 Belgian Grand Prix.

After a cracking Hungarian GP at the start of the month, all ten teams reconvene deep in the Ardennes Forest at Spa Francorchamps as an uncertain second half of the season get underway with the calendar largely unclear beyond the end of September due to travel restrictions and Coronavirus pandemic.

Lewis Hamilton enters this race with an eight point lead over Max Verstappen in the drivers’ standings, thus setting up a tasty looking race which could well be key to igniting momentum for upcoming rounds.

There meanwhile are several other battles in the championship to watch out for across this weekend and beyond, so here is a full guide to the 2021 Belgian Grand Prix. 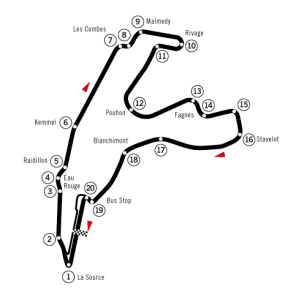 Lewis Hamilton blitzed his way to victory at 2020 Belgian Grand Prix ahead of Valtteri Bottas, Max Verstappen and Daniel Ricciardo as the top four all held position from lights to flag, whilst Antonio Giovinazzi and George Russell retired after the Italian crashed at Campus with a loose tyre hitting Russell’s Williams car.

If missed any of the 11 previous rounds of the 2021 season, please click on the links below to catch up on the missed action.