With F1 currently on a summer break, here are three huge plots to watch out for across the second half of the 2021 season.

From fierce clashes in an unpredictable title battle to a three-way fight for third to surprise podiums, the opening half of the 2021 season has had it all which creates plenty of talking points heading into the second half of this season.

I have therefore picked out three huge plots to watch out for across the next 12 races (currently subject to change due to Coronavirus pandemic), as teams gear up for the end of the current era ahead of a major technical revamp in 2022. 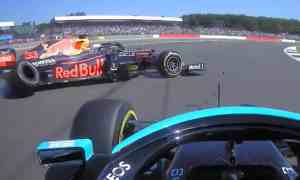 Following a crazy yet unpredictable first half of the season, Hamilton now leads Verstappen by eight points in the title fight in turn setting up a tasty battle between youth and experience in the second half of 2021.

Hamilton will also grow more ruthless in straight on-track battles against Verstappen after their Silverstone clash which divided drivers, critics and fans alike, so expect no sitting back because both drivers will now be eager to win at all costs.

Just to add extra drama to this duel, Red Bull performed well in just two of five further returning races yet to come from 2020 but have managed to close the gap to Mercedes this season, which will give them hope although they will have to raise their game in Italy and Russia where they have often struggled.

With Turkey, Japan, Mexico and Brazil though still in jeopardy, possibilities of race cancellations and a reduced calendar could well play a part, which would place further significance on who of Hamilton or Verstappen can string together a consistent yet better run than the other in this title fight.

Abu Dhabi which is set to host the season finale meanwhile will see various tweaks in track configuration that will pose a new challenge right when the championship matters most, with both drivers hoping that the changes benefit their car more.

Verstappen though has a home race to come as F1 returns to Zandvoort, Netherlands, which could provide a hostile environment for rival teams and especially Hamilton who will have to embrace the expected hatred as motivational energy to try and beat his title rival on Verstappen’s home turf.

To top off this fierce battle for the title, Verstappen also will have to take a grid penalty for a fourth power unit at some point, meaning that the timing of his grid penalty could well prove crucial because if he has to take it at a track where overtaking is difficult then Hamilton will fancy his chances at an eighth title.

Either way, this is one title fight not to miss because Hamilton is looking to become the outright greatest F1 champion ever with an eighth crown, whereas Verstappen is seeking to become F1’s fourth youngest-ever world champion.

The fortunes of both drivers though will also be crucial as to who is crowned Constructors’ champions given that their teammates are evenly matched.

Whilst Bottas and Perez are expected to be scrapping over third place in the championship, Norris’ 113 points already represents a huge improvement for the 21 year-old Brit who has already bettered his points tally in his first two individual seasons in F1 and scored three podiums this season alone.

There now though will be pressure on Norris to try and continue his consistency throughout the second half of the season, after suffering what is now traditionally a 11th round retirement for the Brit in Hungary through no fault of his own.

McLaren though are continuously making progress despite sitting fourth on countback as they sit tied on 163 points with Ferrari, so will be hoping that they can enjoy a strong second half of season like they did in 2020 which could well provide Norris with the boost needed to stun both Bottas and Perez.

Add in the fact that both of Norris’ two closest rivals for third will be required to make sacrifices here and there in coming races to help their teammates in the title fight, this could well be a breakthrough season for Norris if he can pounce on and maximise his opportunities between now and December.

Can Williams Crack On?

Having made progress throughout the first half of 2021 which culminated in a first double-points finish at Hungarian Grand Prix for the first time in 57 races since 2018 Italian Grand Prix, Williams now will be keen to crack on and continue to push their way into midfield mix.

Nicholas Latifi has been regularly outshone at Grove by George Russell since arriving in F1 last season but he maximised his breakthrough opportunity in Hungary with a strong drive, which saw him initially run third before eventually finishing seventh aided by the self sacrifice of Russell.

Often criticised with the pay driver tag, Latifi now faces a tough task of shaking off that criticism and using his maiden F1 points result as motivation to push on and challenge Alfa Romeo more, instead of often battling the Haas cars as has been the case this season.

Russell meanwhile has reached Q2 on all but one occasion this season but hasn’t been able to extract maximum race performance, so he will certainly be looking to continue his one lap performance but at same time trying to find a breakthrough in his race performances.

Now if Russell can do that and Latifi raises his game to a new level plus both drivers maximise their opportunities in crazy races, Williams definitely should be eying up eighth place in the constructors’ standings come end of season.