As we mark what would of been the 2020 Monaco Grand Prix, let rewind back to 1984 which produced a stunning wet race and the emergence of a future world champion.

This weekend however would also feature a maiden pole position plus the absence of one British driver after an incident in Qualifying.

Practice saw BMW bring detuned engines for the Bramham team with the theory that a loss of 200hp would make the car more drivable and reliable, especially around the less power efficient streets of Monaco as the team struggled to score points.

Qualifying was slightly different with only 20 grid spots up for grabs, meaning that Eddie Cheever and Thierry Boutsen of Alfa Romeo and Arrows were two surprise exits.

Up at the front, Alain Prost clinched his maiden pole position and the first for McLaren’s new Porsche powered engine, as Prost edged out Lotus’ Nigel Mansell by 0.091s for that all-important pole with the Ferrari and Renault duos locking out second and third rows.

Martin Brundle meanwhile suffered a huge crash at Tabac which left the car upside-down, whilst Brundle suffered concussion which ruled him out of the race after failing to remember how he returned to the pits despite failing to qualify anyway.

In midfield, Ayrton Senna managed to line up in 13th position for Toleman unaware that he would produce one of his best wet performances on race day.

Stefan Bellof meanwhile was the only non turbo powered car to qualify for the race, edging out Arrows’ Marc Surer by just 0.156s to complete a 20 car field. 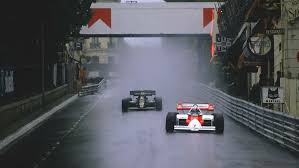 Drivers were greeted with heavy rain and a soaked track on race day which wasn’t exactly ideal for a tight street circuit like Monaco, making track position and careful management of throttle control key to completing the race after a 45 minute delay.

McLaren’s Niki Lauda meanwhile seeked out Bernie Ecclestone to enquire about flooding the tunnel, in order to ensure a total wet track rather than risk a nasty accident as drivers carried spray through the tunnel.

When the race finally got underway, Prost led away from the front but Ferrari’s Rene Arnoux collided with Renault’s Derek Warwick, sending Warwick crashing into Patrick Tambay with both suffering leg injuries.

Mansell soon passed Prost on lap nine and proceeded to pull away at two seconds per lap, until he crashed out at Casino Square just six laps later to hand Prost back the lead.

Senna meanwhile held his position at the start and slowly began to climb his way through the field, finding grip where others including Prost struggled as he soon fought his way past Lauda who soon retired after stalling the car during a spin at Casino Square.

Senna then began to rapidly reel in Prost who was struggling with a misfiring engine and brake issues, as the Frenchman frantically waved in protest to try and have the race red flagged.

Prost eventually slowed down at end of lap 31 to gesture to the stewards that he wanted a red flag, which soon came on the next lap as Prost stopped the car shortly before the finish line. 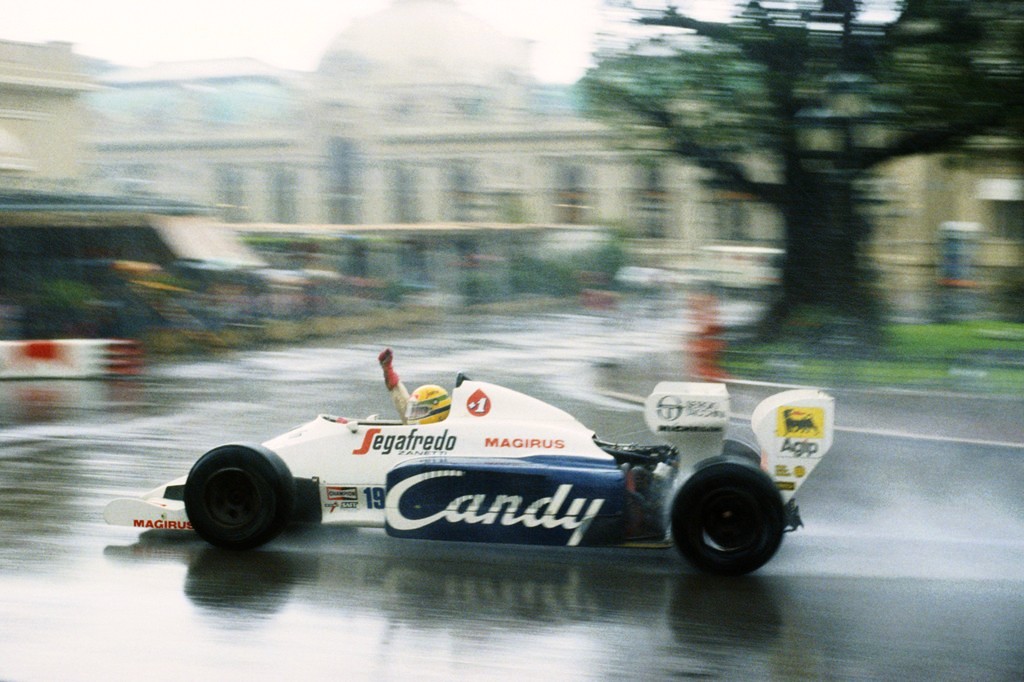 Senna meanwhile was unable to see the red flag and charged past Prost to take the lead and what he thought was victory, only for the rulebook to state that the race result was taken from the last completed lap prior to the red flag which gifted Prost victory.

Luck however would guarantee Senna a second-placed finish because Toleman revealed post-race that Senna had suspension damage, meaning that he would of had to retire a few laps later if the race had continued.

Prost therefore took victory ahead of Senna and Arnoux, with Keke Rosberg, Elio de Angelis and Michele Alboreto competing the top six point finishers, who all only received half-points due to the race not reaching 75% distance.

The decision to red flag the race however would ultimately cost Prost the championship by 0.5 points to teammate – Lauda, because if Prost had raced to full distance and finished second then he would of take six points and been champion.

Further down the classification, Bellof had quietly climbed up to third and could of won the race if it ran the full distance, with Senna and Prost both nursing reliability issues which would of seen them eventually retire if not drop down the order.

Bellof however lost third-place to Arnoux once his Tyrrell car was discovered to had broken weight restrictions, instead being disqualified despite his excellent performance.

Now I would like to invite you to have your say on who would of been driver of the day out of Senna and Bellof if instant social media polls had existed in 1984.