To mark what would of been the 139th FA Cup Final, we take a look back at three of the greatest FA Cup Finals from years gone by.

From last-gasp winners to dramatic comebacks, FA Cup Finals have played host to some of the greatest English sporting moments over the years, so I have picked out three of the best FA Cup Finals to revisit.

If looking for one of the top FA Cup Final cupsets in decades, Wigan’s win in 2013 over Manchester City certainly is up there with the best.

Despite only facing one fellow Premier League club (Everton in Quarter Finals) en route to the final, Wigan produced a brilliant defensive display against the 2011 champions who dominated both halves.

City however wasted their chances despite having better share of possession and attack, which eventually told when Pablo Zabaleta was sent off for a 84th minute foul on Wigan’s Callum McManaman.

That error eventually would swing the match to Wigan who took full advantage of ten-man City, when substitute – Ben Watson headed in Shaun Maloney’s corner to win the tie for Wigan in the 91st minute to complete a fairytale victory despite being underdogs.

This Final is also currently the last final in which both managers failed to remain with their clubs at start of the next season, as Wigan’s Roberto Martinez departed for Everton following the club’s relegation from the Premier League just days later.

Man City’s Roberto Mancini meanwhile was sacked two days after the final, following a breakdown in relationship with club staff and players in preceding months.

It is often hard to find a great FA Cup Final because recent finals have often been one-sided or settled by one goal margins, yet the 2006 Final threw up six goals between Liverpool and West Ham plus a penalty shootout.

West Ham struck first when Jamie Carragher diverted Lionel Scaloni’s low cross into his own net after 21 minutes, which currently remains as the last own goal in a FA Cup Final to date.

Steven Gerrard had assisted Cisse’s goal but turned goalscorer himself just nine minutes into the second half with a close range strike, before Paul Konchesky seemed to gift West Ham the winner with a stunning shot from left flank into top right-hand corner past Reina.

One last twist would eventually follow in injury-time as Gerrard latched onto a poor clearance, smashing into the bottom corner from 35 yards to make it 3-3 which is how the match finished after extra time.

Liverpool eventually won their seventh FA Cup after emerging victorious 3-1 on penalties, despite half of the eight penalties being missed with three such misses coming from West Ham.

Nevertheless, it remains as one of the great 21st century FA Cup Finals to date and the last such Final to had needed a penalty shootout to decide the winner, after what I think was possibly the most unpredictable final of recent memory. 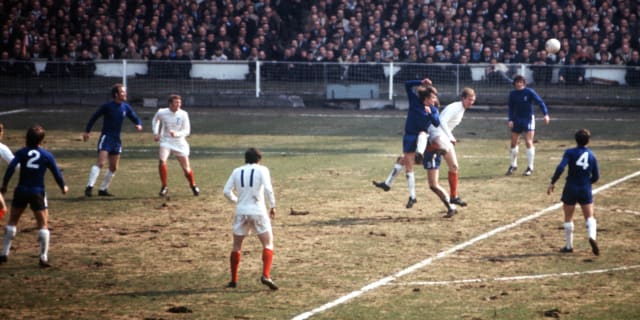 Rewind back to 1970 and you have one of the most iconic FA Cup finals ever as Marvin Hinton’s flamboyant Chelsea took on Don Revie’s uncompromising Leeds United at the old Wembley Stadium.

It therefore was no surprise that Leeds would produce most of the early chances with Jack Charlton’s header putting them ahead, despite several excellent saves from Peter Bonetti which would still be considered top quality today.

Chelsea then soon seized control and found an equaliser shortly before half-time through Peter Houseman, who fired into bottom right corner from long range.

A scrappy second-half soon saw both teams waste chance until Mick Jones struck what appeared to be a late Leeds winner, only for Ian Hutchinson to head Chelsea level and force extra time on a poor Wembley pitch.

Extra-time however wielded no further goals despite Allan Clarke nearly drilling in a winner for Leeds, only for David Webb to clear his effort and keep the match locked at 2-2, thereby forcing a replay for the first time since 1912.

This final though had everything that you would expect in a modern football thriller such as; physical defending and high quality attacking on top brawling amongst players.

The replay in particular holds the record as the most-watched club football match in UK history, with over 28 million tuning in across BBC and ITV which remains unbeaten to this day and one reason as to why this is one of the FA Cup’s most iconic finals ever.