Arsenal continue to lead the way in a full roundup of weeks Six to Ten of 2021-22 Women’s Super League season.

Jonas Eidevall’s Gunners entered November’s action sat top of the table and continued to go unbeaten throughout five matchweeks across November and December, as Chelsea continued their chase of another domestic treble.

Elsewhere, Everton were under new management of Jean-Luc Vasseur following Willie Kirk’s sacking in late October, whilst there were two further sackings within the latest period of fixtures.

Kim Little’s brace plus a goal and assist from Beth Mead helped Arsenal thrash West Ham to stay top of WSL in a 4-0 win, which was sealed with a 84th minute own goal from Grace Fisk.

Jessie Fleming’s 22nd minute winner in a 1-0 away win at Aston Villa ensured Chelsea stayed three points behind the Gunners in second.

Tottenham remain third after Ria Percival’s injury-time header saw Spurs fight back to snatch a 1-1 draw at home to fifth-placed Manchester United, after Alessio Russo had fired the Red Devils ahead in first-half injury-time.

Brighton sat fourth as Aileen Whelan headed in a 61st minute winner to condemn Everton to defeat in the Toffees’ first WSL match under Jean-Luc Vasseur. 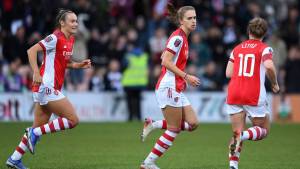 Arsenal remain top as Vivianne Miedema’s injury-time header rescued the Gunners a late 1-1 draw, after Rachel Williams had fired Tottenham ahead in the North London derby.

Chelsea consequently reduced Arsenal’s title lead to a single point with a dominant 4-0 away win at Manchester City, in which Jessie Fleming, Sam Kerr, Fran Kirby and Magdalena Eriksson all found the net.

Simone Magill’s 76th minute strike saw Everton record their first point under Vasseur’s management in a comeback 1-1 draw at home to Man Utd, after Ella Toone had fired the visitors ahead on a tenth-minute counter-attack.

Emma Harries’ 92nd minute header saw Reading come from two goals down to snatch a 2-2 draw at West Ham, after first-half headers from Lisa Evans and Grace Fisk had the Hammers in control until Abbey-Leigh Stringer scored a 70th minute own goal.

Katie McCabe set up Miedema’s 48th minute opener before scoring herself from the penalty spot nine minutes later, as Arsenal beat Man Utd 2-0 at Leigh Sport Village to stay top of the table.

Dowie and Harries found the net as Reading defeated third-placed Brighton 2-0 at the Madejski Stadium.

Tottenham missed the opportunity to move above the Seagulls into third after Dagny Brynjarsdottir fired in a 69th minute winner for West Ham.

Hayley Raso netted twice and provided an assist as Man City crushed Aston Villa 5-0 at the Academy Stadium, with Weir, Georgia Stanway and Hemp all netting once.

Leicester extended their winless WSL run to eight matches after Magill struck a 81st minute winner for Everton to make it four points from three WSL games under Vasseur, which led the Foxes to sack Jonathan Morgan during the international break.

Chelsea entered this round off the high of being crowned 2020-21 Women’s FA Cup champions but suffered a shock defeat at Reading, as Rose played an one-two with Harries to fire in a fourth minute winner for the Royals.

Arsenal bounced back from their FA Cup heartbreak with a ruthless 4-0 home win over ten-women Leicester to put them four points clear of Chelsea, as Jordan Nobbs and Miedema scored once before Frida Maanum struck twice after Jemma Purfield was red carded for the visitors.

Leicester though were playing their first match under new management as Lydia Bedford took charge as new permanent manager.

Tottenham this time took full advantage of Brighton’s defeat as Kyah Simon cancelled out Remi Allen’s opener, with Rachel Williams completing a comeback 2-1 win at Aston Villa after she fired in a 68th minute winner from Jess Naz’s through ball.

Ellen White produced a 89th minute winner for Man City in a 3-2 win against her former team – Birmingham City, after City twice fought from behind in an entertaining first half, as Stanway and Hemp cancelled out goals from Christie Murray and Louise Quinn.

Toni Duggan ended her eight-year goal drought as an Everton player after she poked in a 76th minute equaliser in a 1-1 draw against West Ham, having fallen behind to Zaneta Wyne’s 40th minute tap-in.

Arsenal sit top from Chelsea heading into the Xmas break after their home games against Brighton and Chelsea were postponed, due to Coronavirus outbreaks affecting English football.

Tottenham remain a single point behind Chelsea in third after Jessie Naz fired into the top right corner from Rachel Williams’ pass to defeat Everton.

Leicester headed into the festive break on a high with their very-first WSL victory as Sophie Howard’s curler and Sam Tierney’s header sealed a 2-0 home win over Birmingham, which saw the visitors drop to rock-bottom.