In an exclusive interview, 2021 F3 driver, Matteo Nannini has opened up about his rise up the motorsport ladder and life in F3 across the last two seasons.

Nannini comes from a family with motorsport history in their blood as his nephew – Alessandro Nannini is a former F1 race winner, so he knew that racing was always an option as he quickly climbed the racing ladder to reach F3 at just 16 years-old in 2020.

The Italian-Argentine driver went on spend two seasons in F3 where he gained one win and is currently exploring his options for 2022 as he candidly spoke about his career so far and F1 dreams.

As the nephew of ex F1 race winner, Alessandro Nannini and singer – Gianna Nannini, who or what inspired you to become a racing driver?

Nannini: “I think racing was already in my blood when I started. At the age of 7 I had the chance to try a little rental go kart and I immediately fell in love with it. That was the moment where it all started.”

Having enjoyed a successful karting career, what were your initial expectations when you stepped up to Single-Seater racing?

Nannini: “Racing in karting gives you a very solid preparation in terms of how to approach a race, how to manage a start and so on… But driving a car is completely different from racing in a go-kart.

“Of course as a racing driver I wanted to win, but my expectations were not that high. But once I jumped in the car I felt very comfortable from the beginning.

2019 saw you enjoy instant success with a dominant title in F4 UAE, yet you endured a fragmented campaign across multiple European series. As a young driver, how tough was it to find yourself spending your rookie season racing in different series for brief periods? 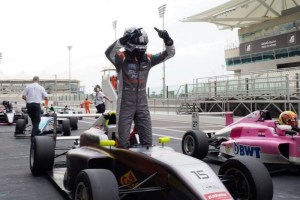 Nannini: “Actually, it was not that difficult for me. One of my strengths as a driver is that I can adapt to different situations and conditions fairly quickly and this helped me a lot during the 2019 season.

Last season saw you sign for Jenzer Motorsport and F3 where you eventually found your mojo in Spain after five tough opening rounds. Looking back now, how do you reflect on the progress that you made throughout the campaign in a midfield car?

Nannini: “It could have been always better. I was the only driver who managed to take some points for the team. Most of the tracks on the calendar were new for me and with only one practice of 45 minutes before qualifying, there was no margin for mistakes.

“In Barcelona we claimed a podium finish, my first podium in FIA F3, and in other occasions I was really close to it.”

This season saw you initially attempt a rare dual F2/F3 campaign before eventually opting to focus on F3 after sponsorship issues. Looking back now that the F3 season is over, how do you reflect on a season which began with high promise of a F3 title fight but disappointingly petered out?

Nannini: “The season started well, but didn’t end as well as I expected. The exit of my team from the category had a big impact on my results during the last rounds of the season and it’s really disappointing.

“Nevertheless, I think I showed that I’m a fast driver and that I just need the right car to be able to fight for results that count.”

Nannini: “We did more races and this is always good for a driver. Spending more time driving the car always helps and I enjoyed it.”

Although F1 is your eventual aim despite making that breakthrough now looking tough for youngsters, what would it mean to race in F1 despite currently looking at IndyLights and other series?

Nannini: “I think a lot of people deserve to be in Formula 1. Nowadays it’s become more and more difficult. Other series give you many more options for your career.

“Racing in Formula 1 is my biggest dream and goal, as only 20 drivers in the world are able to do that. It would mean a lot for me, especially to silence all critics and the people that during my career said that I wouldn’t be able to achieve anything.”

Finally, what are your current plans for next season?

Nannini: “My goal is still to be a Formula 1 driver. I will do what can really help me to achieve my goal.”