As Formula One prepares to head to Istanbul, Turkey for 2021 Turkish Grand Prix, here is a packed preview containing everything that you need to know ahead of the latest round in Lewis Hamilton’s title fight against Max Verstappen.

Hamilton enters this race with a two point lead over Verstappen with seven races left which means that every point matters in the coming weeks, especially with Hamilton needing to take a power unit penalty at some point in coming races.

McLaren meanwhile will be seeking redemption on a weekend where rain is a decent probability based on early weather forecasts after suffering late heartbreak in Sochi, Russia, as they continue their battle against Ferrari for third in the constructor standings.

Now here is a full guide to everything that you need to know ahead of 2021 Turkish Grand Prix. 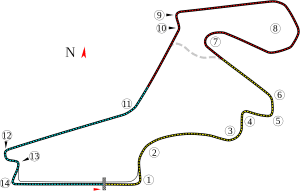 Hamilton overcame a tricky start at last year’s race in Istanbul in wet conditions to eventually win on an one-stop strategy, which proved enough to seal the title after title rival – Valtteri Bottas finished a lap down in 14th following a series of spins.

Pole-sitter and initial race leader, Lance Stroll meanwhile finished ninth at the flag after front wing damage reduced downforce, in turn creating heavy graining which saw him tumble down the order after his first stop.

If missed any of the 15 previous rounds of the 2021 season, please click on the links below to catch up on the missed action.