With just one seat left in 2022 Formula One season which is at Alfa Romeo, here is a look at four candidates who deserve to be in contention for the drive.

Following last month’s announcement that Kimi Raikkonen is retiring at end of 2021 and will be replaced by Valtteri Bottas, questions have swirled around who will take the second seat at Alfa Romeo as fans continue to debate whether to stick with Giovinazzi or promote a F2 driver on talent or financial backing.

Alfa Romeo Team Principal, Frederic Vasseur however seems to have four candidates in mind for the second race seat alongside Bottas next season, so here is a look at four drivers who are worthy of being in with a shout for the drive.

With just 19 points in 53 races across almost three seasons which averaged out at 0.35 points per races since making his full-time F1 debut in 2019, Giovinazzi surely shouldn’t be in contention for the second seat at Alfa Romeo next season.

2022 however sees the introduction of new technical regulations and with Raikkonen set to officially retire from F1 at end of this season, it is plausible that Giovinazzi could be retained simply to provide the team with continuity as Bottas moves across from Mercedes to replace Raikkonen.

Giovinazzi’s regular knockout qualifying record this season meanwhile has been poor across 14 races (Giovinazzi didn’t set a qualifying time in Azerbaijan), with the Italian averaging 13th on the grid despite reaching Q3 on three separate occasions compared to just once and average 17th on grid in 2020.

It is therefore difficult to foresee him retaining his seat but continuity purposes might well be what sways Alfa’s driver decision Giovinazzi’s way, on top of his continued progress season-by-season although that alone wouldn’t really be enough in my opinion to justify him keeping his seat.

Alpine junior, Guanyu Zhou is the hotly tipped favourite to replace Giovinazzi with the sport looking to break through into the Asian market, which makes Zhou the ideal fit given his major Chinese financial backing amidst irritation of many F1 fans at the concept of pay drivers.

The 22 year-old though has proved himself in F2 after finishing as the top rookie in 2019 before a mixture of mechanical unreliability and bad luck cost him last season, despite claiming a breakthrough victory in the Russian Sprint Race.

This season though has seen Zhou put himself in title contention but a mixture of driver errors and strategy blunders look to have cost him a strong shot at the title, as he currently sits 36 points behind his fellow Alpine junior – Oscar Piastri with six races across two rounds left.

His £22.1m financial backing coupled with F1’s ambition to break into the Asian market though could well be the sway that Alfa needs given their financial situation as a constructor lower down the grid, despite rumoured differences concerning contract length between Zhou and Alfa Romeo.

Should Alfa Romeo opt to get rid of Giovinazzi but are unable to agree a deal to sign Zhou, surely Piastri deserves a chance if he is crowned 2021 F2 champion which would mark a third consecutive title in three seasons at just 20 years-old.

Now if you look further into Piastri’s junior record across the last three seasons then you will find a consistent points-scorer even without pole-positions, which speaks volumes about the Aussie’s talents even with mentoring from nine-time F1 race winner – Mark Webber alongside Alpine.

F2 also is meant to serve as the final step towards F1 with three of the four modern-era champions having moved up to F1 with exception of 2019 champion – Nyck De Vries, who went on to become 2021 Formula E champion instead after choosing a different pathway after departing McLaren’s junior programme.

It therefore would be a massive shame to see Piastri become the second driver to miss out on an instant promotion to F1, especially because he has earned that right to graduate into F1 on pure merit yet could miss out due to constructor financial greed like Callum Ilott last season to Nikita Mazepin at Haas.

In fact if Piastri does indeed miss out then serious questions do need to be asked of the junior pathway to F1 because if a F2 champion is missing out on graduation to pay drivers, something needs to be done like introducing a compulsory third seat at a F1 team for the F2 champion for example. 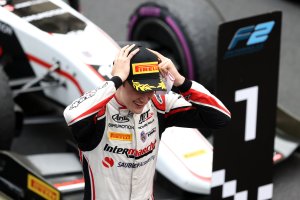 Due to Alfa Romeo’s links with Sauber Junior Team, perhaps Theo Pourchaire is worth considering following a meteoric rise up the motorsport ladder which currently sees the 18 year-old sat fifth in F2.

Like Piastri, consistency has been key to Pourchaire’s rise up the motorsport ladder but across just four racing series compared to the Aussie’s six racing categories which is extremely impressive for someone who has just entered the world of adulthood this year.

Pourchaire would also represent a huge step forward for Alfa Romeo in promoting their home-grown talent into the main F1 team, especially given that there don’t seem to be any other realistic prospects within the next two seasons at present.

F1 however is set to introduce a new compulsory requirement to run rookie drivers in FP1 next season which could suit Pourchaire as far as Alfa Romeo are concerned, enabling the Frenchman to do a second season of F2 next season alongside selected FP1 sessions in F1 to prepare him for a move in 2023.

Pourchaire though isn’t entirely out of title contention in F2 this season yet despite his chances looking slim with a 58 point deficit at present, which could complicate matters slightly from Alfa Romeo’s perspective if he was to unexpectedly snatch the title but miss out on a F1 seat.

With Bottas confirmed for next season and beyond on a multi-year contract, Alfa Romeo do face a conundrum over the second seat and their long-term plans if their intention for 2023 is to put Pourchaire in the seat alongside Bottas.

Should that scenario indeed be the case then they ideally need someone who is happy to sign an one-year contract and I just can’t see Zhou or Piastri being happy to do so given their young ages, unless it is a simple one-year loan deal with view to replacing Fernando Alonso at Alpine in 2023.

Giovinazzi therefore would be the ideal second driver in that scenario because he will provide continuity heading into the new era of F1 for Alfa Romeo, yet he hasn’t done enough in terms of results and performance to justify a contract renewal.

I however do have a gut instinct that financial benefits for both team and sport will outweigh talent in this instance and Zhou will sign for the team once agreed contract terms, which will bring huge marketing opportunities in China with the Chinese Grand Prix set to return in 2022 after a two-season absence.

As for Piastri, it will be tough to see him left on the sidelines if he wins the F2 title this season but hopefully Alpine will promote him to fulfil Zhou’s current Test/Reserve Driver role with selected FP1 sessions, and hopefully place him in a series like IndyCar or Formula E so he can continue to build his skillset.

Ferrari junior, Robert Shwartzman meanwhile seems to have slipped under the radar after being heavily linked with the team last season, although he hasn’t exactly enjoyed a strong second season which has likely hurt his chances unless his finances and Ferrari support can talk Alfa into a pay driver deal.

Either way, it does look like the second seat is Zhou’s to lose and although there will be that ‘Pay Driver’ tag initially, he does have potential to do well if given the right opportunities as seen in F2 in terms of setup and car performance and could spring some surprises if he gets the seat.