Peterborough United welcome Bournemouth to London Road in the standout tie from the second set of midweek action in 2021-22 Sky Bet Championship.

Victory will see Peterborough climb as high as 19th if Millwall and Barnsley fail to win elsewhere, whereas a win would return Bournemouth to the summit of the table. 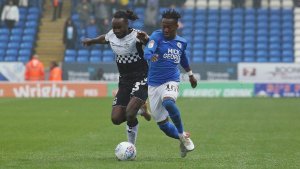 Siriki Dembele could be in contention to start Peterborough after scans showed no damage after he suffered a knock to his knee in Friday’s defeat at Coventry.

Jonson Clarke-Harris is a doubt as he appeals a four-match ban but Mark Beevers, Joel Randall, Jack Marriott (all hamstring) and Ricky-Jade Jones (knee) are ruled out.

Defence has been Peterborough’s biggest issue in recent weeks but they can take heart from their last home performance where they thrashed Birmingham City, although they will have to raise their level even further here if they want victory because Bournemouth will be a difficult team to beat defensively.

Speaking of Bournemouth, they are just on a roll at the minute with multiple threats across the pitch who can cause major attacking issues going forward, although they do seem to switch off occasionally in the second half which is where Peterborough need to pounce if want a result.

Now if Peterborough can keep things tight in the first half then they will have a chance but if they fail to do so, I can see Bournemouth getting a comfortable win such is their consistency at present but they cannot settle when two goals up because this is the sort of match where they need huge results.