As the 2021-22 Women’s Super League prepares to kick off this weekend, here is a season preview containing everything that fans need to know.

Chelsea enter this season as the two-time defending champions and looking for a fifth overall domestic Women’s Super League (WSL) title, yet are expected to face serious competition for a third consecutive crown.

It is also expected that the Golden Boot could be fiercely fought for especially after Vivianne Miedema and Sam Kerr in last two respective seasons secured the honour, having both netted over 20 goals each in their award-winning campaigns.

On that note, here is a run down of everything which you must know ahead of the new season.

This season is scheduled to draw to a close on Sunday 8 May 2022 with all 12 teams in action simultaneously from 12:30pm BST, with highlights from that particular final round of fixtures including Chelsea’s home clash against Man Utd at Kingsmeadow and West Ham face Arsenal in a London derby at Victoria Road.

12 clubs will compete in the WSL this season as Leicester City make their debut in the premier competition of English Women’s Football, so here is a full list of all 12 teams and their main stadiums for 2021-22 season.

*Stadiums listed above for Arsenal, Aston Villa, Brighton, Chelsea, Everton, Manchester City, Manchester United, Tottenham and West Ham are their main stadiums for this season, although they will occasionally play fixtures at the men’s stadium of their team throughout the season.

** Birmingham City are relocating from Solihull Moors’ Damson Park to St Andrew’s where their men’s team currently play their home matches. * Stadiums listed above will serve as the main stadiums for majority of matches although Arsenal, Aston Villa, Brighton, Chelsea, Everton, Manchester City, Manchester United. Tottenham and West Ham will occasionally play fixtures at the stadium which predominantly host home fixtures of their men’s team.

*** Leicester will play majority of home matches at King Power Stadium but in event of men’s matches being moved to Sundays due to preceding midweek European action or TV coverage, they will use Burton Albion’s Pirelli Stadium as an alternative stadium.

Three Players To Watch Out For

After having relinquished her two-time Golden Boot crown to Chelsea’s Sam Kerr at end of last season, Vivianne Miedema will certainly be keen to endure that 2020-21 campaign was an one-off dip, as she seeks to return her top goalscoring form after a positive Olympics performance for Netherlands.

Miedema will also have fresh supporting reinforcement up front in Nikita Parris and Mana Iwabuchi who are set to bring extra attacking threat and goals, which should help Miedema if she can put herself as the central focus of Arsenal’s attack and rediscover her clinical edge. 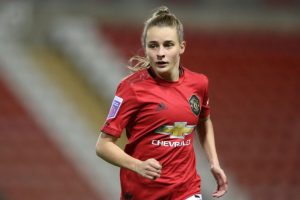 Having enjoyed a break-through 2020-21 season for Man Utd and England with 11 goals in 29 appearances across all competitions, Ella Toone will certainly be looking to push on and continue to develop her growing reputation as one of England’s future leading midfielders.

Toone will however have a new manager to impress as Marc Skinner replaces Casey Stoney at Utd so it will be interesting to see how she fares under Skinner’s attacking yet defensively adaptive style, which could well suit her if she can adapt to his playing tactics and maximise her opportunities.

After enjoying a stunning 2020-21 season with 28 goals in 34 appearances across all competitions, Kerr now faces a tough challenge to build on her success as she helped Chelsea to three trophies in five competitions.

This season will see fresh challenges though as many of Chelsea’s main rivals have strengthened their attacking options, which means that Kerr is going to have to raise her game once more which could well take her to a new level given that she is currently in the prime years of her playing career at 27 years-old.

Chelsea teammate, Fran Kirby though will be the biggest threat from within after netting 25 goals and also proving herself as a fierce playmaker, thus adding extra pressure on Kerr to defend her position as one of the WSL’s best strikers.

In the UK, BBC remain as free-to-air rights holders with coverage of 22 matches in total, of which 18 will be televised across BBC One and BBC Two, with four further matches put on BBC Red Button and Online under a new TV deal which commences this season on a three-year contract.

BBC will also continue to transmit The Women’s Football Show on Sunday evenings post 10pm following each round of fixtures containing highlights of every match played each specific weekend.

Sky Sports replaces BT Sport as the Pay-TV holder and will show up to 44 fixtures across each of the next three seasons, with a commitment to a minimum of 35 televised fixtures per season with a selection of live matches also set to be aired across Sky Showcase and Sky Sports Mix for non sports subscribers.

All fixtures not chosen for coverage across BBC and Sky Sports will be streamed live on the FA Player for UK based fans.

Internationally, the WSL will be aired across 18 countries, with full details of international broadcasters available below.