With the 2020 Azerbaijan Grand Prix currently postponed due to the Coronavirus pandemic, let rewind back to a thrilling 2017 race weekend in Baku.

From red flags throughout the weekend to a controversial barging incident between title rivals plus a surprise win from midfield, this 2017 race is currently the best Azerbaijan Grand Prix around in the race’s short history.

Now please join us as we guide you through a rewind of the biggest incidents from throughout the weekend, plus a look at the aftermath of various incidents during the race.

Max Verstappen topped FP1 and FP2 for Red Bull ahead of Daniel Ricciardo and Valtteri Bottas in respective sessions, with the latter eventually topping FP3 heading into Qualifying.

Sergio Perez and Jolyon Palmer became the first two victims of the weekend after both hit the barriers as they made their way through the tricky sections of Turns 8, 9, 10 and 11 in FP1 and FP2 respectively.

Drivers however struggled with braking throughout Friday Practice as several avoided session ending collisions with the barriers, whilst others took to escape roads to rectify their mistakes.

Jolyon Palmer failed to take part in Qualifying due to a fire in FP3 caused by a fuel leak, which meant that he lined up last on the grid.

Romain Grosjean and Marcus Ericsson sandwiched the McLarens of Fernando Alonso and Stoffel Vandoorne amongst the remaining Q1 exits apart from Palmer who didn’t take part.

Q2 threw up no surprise exits with the Toro Rosso duo of Daniil Kvyat and Carlos Sainz locking out the sixth row, ahead of Kevin Magnussen, Nico Hulkenberg and Pascal Wehrlein.

Lewis Hamilton had dominated Q1 and Q2 but slipped up on his first Q3 flier to slip to second-place behind Bottas by 0.154s just before Ricciardo hit the wall at Turn Six to trigger a red flag and end his session in tenth place.

Once the session resumed, the remaining drivers in Q3 then had just time for a one lap shootout which was won by Hamilton who found eight tenths on his first effort to snatch pole from Bottas with a 1m 40.593.

Ferrari locked out the second row whilst Max Verstappen recovered from a reliability issue in FP3 to finish fifth, ahead of Sergio Perez and Esteban Ocon of Force India.

Hamilton made a clean start whilst Bottas and Ferrari’s Kimi Raikkonen collided on exit of Turn Two, with Bottas picking up a puncture whilst Raikkonen slipped down the order behind Perez and Verstappen after the Mexican got a better start on the Red Bull.

Unreliability however would hit three cars early on with Palmer, Kvyat and Verstappen all retiring with a variety of issues, whilst Kvyat’s stoppage caused the first Safety Car of the race.

Once racing resumed on lap 17, Raikkonen’s car dispersed debris which brought the Safety Car back out, which went quite slow and caused Hamilton to slow down through Turn 15 on lap 19 and get hit by Sebastian Vettel who then pulled alongside and slammed his Ferrari into the Brit.

On the second restart, Perez got squeezed by Felipe Massa to the outside of Turn Two which allowed Ocon to dive down the inside, resulting in the Frenchman clipping Perez’s front-left tyre to cause damage to both cars and another Safety Car.

A red flag however was soon shown two laps later to allow marshals to safely clear the track of debris, which lasted over 20 minutes before the race restarted behind the Safety Car. 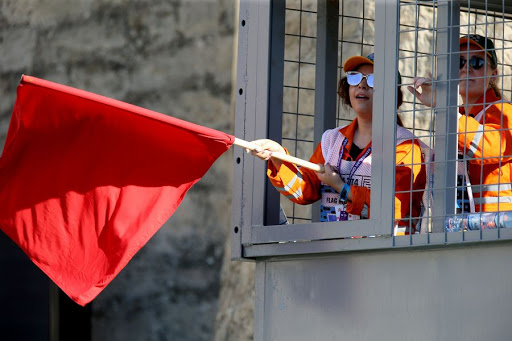 Two laps into the restart, Massa suffered suspension failure and had to retire whilst Hulkenberg hit the wall on the inside of Turn Seven, bending his front-right tyre to send him out of the race down the Turn Eight escape road.

Hamilton’s headrest then began to loosen which forced him to pit from the lead, whilst Vettel received a 10s stop and go penalty for his antics on lap 19 but re-joined ahead of Hamilton and stayed in that order until flag where they finished fourth and fifth.

Ricciardo therefore inherited the lead and cruised to victory whilst Bottas staged one of the most dramatic comebacks to finish second, pipping Williams’ Lance Stroll by 0.105s with a last gasp move as Stroll became the second youngest ever podium finisher.

Perez and Raikkonen meanwhile retired in the closing stages with respective steering and oil leak issues.

Vettel extended his championship lead over Hamilton to 14 points but faced further post race scrutiny from the FIA, which was concluded when the German apologised and pledged to devote personal time to help with education of drivers in junior formulas.

The German however lost out on a fifth title after Hamilton went on a blistering run of seven podiums in the final nine races, following the summer break that season to win his fourth of now six world titles.

Force India meanwhile managed to rein in Perez and Ocon through team orders until they were taken over in mid 2018, with Ocon dropped at end of that season to make way for Stroll.

Across at Sauber, Ericsson survived for another season before switching to IndyCar,  whilst Wehrlein was dropped at end of that season and replaced by now Ferrari star – Charles Leclerc.