With just hours until 2022 UEFA Women’s Euro gets underway, here is a guide to everything that you need to know about the tournament.

Over the next 25 days, several teams from across Europe will gather on English soil in order to do battle to be crowned 2022 UEFA Women’s Euro champions, with numerous teams hoping to become the fifth different winner of this competition after Sweden, Norway, Germany and Netherlands.

Across this preview, you can discover full details concerning tournament dates, host cities and much more and without further ado, here is everything you need to know about 2022 UEFA Women’s Euro.

2022 UEFA Women’s Euro is being hosted by England who were awarded the rights in December 2018 without any official challenge, after no other country within Europe chose to submit an official bid for the hosting rights to the tournament.

2022 UEFA Women’s Euro will be held between 6-31 July 2022 and is set to feature 31 matches in total across the tournament, with the winners of the competition crowned following the Final at Wembley Stadium on Sunday 31 July.

How Many Teams Are Involved? 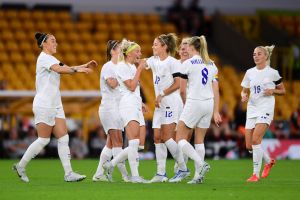 16 teams will be involved in this summer’s Women’s Euro with all 16 nations split into four groups of four, with tournament hosts – England automatically placed in Group A.

Here is a reminder of the groups below:

*Portugal were a late replacement after Russia were banned from the competition following the country’s invasion of Ukraine.

How Will Tournament Format Work?

The tournament will commence with a Group Stage featuring all 16 teams split into four groups labelled A-D, with each team in each group playing each other once between 6-18 July, with a guide to the matchdays (kick-off timings in brackets) for each group available below.

The top two from each group will advance to the Quarter-Finals which will be played across four consecutive nights between 20-22 July, with the winners of Groups A-D meeting the runners-up of their nearest group:

The winners of all four Quarter-Final ties will then advance to the semi-finals, which will take place across 26 and 27 July respectively, with both matches kicking off at 8pm BST.

The two winners of the semi-finals will meet at Wembley Stadium on Sunday 31 July in the Final at 5pm BST UK Time.

Where Will Matches Be Played?

Matches will be played across 10 stadiums within eight cities with Old Trafford hosting the tournament opener between England and Austria on 6 July, before six other stadiums host a mixture of Group matches and Quarter or Semi-Finals.

St Mary’s Stadium, Southampton, and Academy Stadium, Manchester, will only host Group matches in Groups A and D respectively.

Wembley Stadium, London, will host the Final on Sunday 31 July with kick-off confirmed for 5pm BST.

How Will 2022 UEFA Women’s Euro Be Televised?

BBC will be host broadcaster for UK audiences and have confirmed the following schedule for the Group Stage:

*Broadcast plans are subject to change if necessary.

BBC will confirm coverage details for the Knockout Stages in due course once the Quarter-Finalists begin to be officially confirmed between 15-18 July.

How Will Prize Money Pay Out?

UEFA have confirmed that the total prize money pot will be €16 million with all qualified teams guaranteed a minimum €600,000 payment, whilst here is how the remainder of the prize money will be distributed:

If the eventual champions win all of their matches en route to the title, they will be awarded a cumulative total prize sum of €2,085,000.

Five Players To Watch Out For

Click here for a full guide to five players who are worth watching out for across tournament, featuring Beth Mead and Alexia Putellas amongst others.

Who Are Title Favourites?

Spain enter the tournament as title favourites with the bookies at 7/2 odds-on to emerge as Women’s Euros champions for the very first time.

Hosts – England are ranked second favourites at 4/1 ahead of France at 5/1 and reigning champions, Netherlands at 6/1, whilst Germany and Sweden are joint fifth favourites at 7/1.