As the 2021 Formula One season begins to draw to a conclusion, all ten teams now kick-off the final double-header of the season in Jeddah, Saudi Arabia, for the inaugural Saudi Arabian Grand Prix.

Although a sombre mood lingers over the paddock heading into this weekend following the death of iconic Williams founder, Sir Frank Williams, there is still plenty at stake in the championship across both driver and constructor standings.

Max Verstappen enters this round with an eight-point title lead as he hunts down a maiden F1 title, yet Lewis Hamilton currently has the better form as he chases a historic eighth title so we will take a look at how Verstappen can seal the title in Jeddah.

Mercedes meanwhile hold a five point lead but are unlikely to seal an eighth consecutive constructors’ title here, unless Red Bull suffer a double driver retirement and the Silver Arrows both finish on the podium.

Now, here is a full guide to everything that you need to know ahead of 2021 Saudi Arabian Grand Prix. 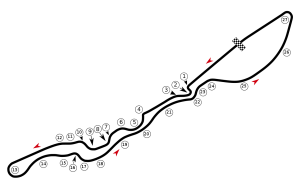 With just 52 points left to play for in the final two rounds of this season, Verstappen could be crowned champion in Jeddah if he finishes in two with the following permutations swinging in his favour.

Third or lower for Verstappen would see the title fight go to the season finale in Abu Dhabi irrespective of what Hamilton achieves in this race.

If missed any of the 20 previous rounds of the 2021 season, please click on the links below to catch up on the missed action.