Following the release of F1’s latest global survey results, here is a look at what the feedback means for the sport’s future.

The latest survey came four years after F1’s last worldwide  survey in 2017 with Nielsen Sports, Motorsport Network and F1 working together in partnership in order to understand the views of fans on various topics across the sport.

Over 167,000 fans across 187 countries responded to the survey with a younger diverse audience sample compared to 2017, of which many were female which highlights a huge rise in F1’s popularity with women in recent seasons.

Many various results consequently emerged across the survey as we now take a look at how the feedback is set to affect F1’s future moving forward.

With the legendary old guard of Lewis Hamilton, Sebastian Vettel, Fernando Alonso and Kimi Raikkonen currently in their twilight years, it is easy to fear for the sport’s future popularity but latest results suggests that F1 is in for a promising couple of decades.

Lando Norris meanwhile was second most popular with particularly high favouritism from female fans and across all fans in the 16-24 age range, which represents a huge relief for F1 organisers because Norris and Verstappen plus other youngsters are helping attract younger fans to the sport.

Hamilton was the third most popular driver ahead of Daniel Ricciardo and Sebastian Vettel with the Brit proving most popular with Brazilian, Canadian and British fans, although those three drivers featuring in the top five also demonstrates that there is still substantial interest from older audiences.

Charles Leclerc, George Russell and Pierre Gasly also feature in the top ten which in addition to Verstappen and Norris’ high popularity, should reassure any sceptics about the prospect of F1 struggling to attract new supporters once the icons retire given how fickle the young audiences of today can be.

McLaren meanwhile has seen a huge rise in popularity since the 2017 survey as they leapt from 15.8% four years ago to become the most popular F1 team on the grid, with 29.8% of responses selecting McLaren as their favourite team.

This result also is a reflection of McLaren’s rise back up the grid and popular driver pairings featuring Norris and Carlos Sainz between 2019-20 and Norris plus Ricciardo this season, which in turn could be linked to Norris and Ricciardo’s high popularity as drivers.

Mercedes meanwhile continue to struggle to feature as one of the popular teams which could be down to a dislike of their dominance, as the Silver Arrows suffered a 4.3% drop from 16.2% in 2017 to 11.9% in 2021 although they have certainly found themselves in a proper title scrap this season.

2022 though will herald a new era of racing which could well see huge changes to popularity of various teams depending upon on-track performances and future driver pairings come the next global survey. 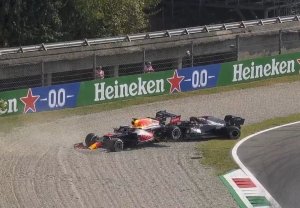 With only 18 countries now offering official Free-To-Air (FTA) coverage of at least one race at minimum, this statistic is reflected in the latest global survey with a 56% decline in respondents who watch FTA coverage with many deflecting to online coverage via F1 website or Pay TV.

Streaming services and social media platforms have also seen increases in consumption of content by F1 fans, which highlights the evolving rise of digital content because other traditional media outlets of radio, general sport websites and print media alongside FTA TV have seen further falls in popularity with fans.

Focusing on social media specifically, 40% of fans consume F1 content on Twitter compared to 31% in 2017, whilst Instagram grew its F1 following from 17% to 37% whereas Facebook has seen a huge slump in popularity with respondents from 60% to 20% following various controversies.

Although FTA TV audiences has declined in line with the emergence of Pay TV and subscription services like F1TV, almost 85% of respondents revealed that they still watch over 13 races each season with over 90% specifically watching the race only rather than pre and post-race coverage too.

TV though does remain the primary source for F1 content on race weekends for 80% of respondents, which increases to almost 100% if include those who view via streaming services.

All in all, these numbers do accurately reflect how different life is now with people spending less time watching entire broadcasts and instead more time on social media platforms, where they likely are consuming bite-size F1 content or engaging in various F1 groups or doing alternate activities.

In the survey, respondents rejected several gimmicky proposals like awarding points for Qualifying which is currently the case in many lower-level single-seater categories, as well as introducing success ballast akin to BTCC and reverse grids.

Respondents though reported a keenness to see F1 lead the way in sustainable fuels as part of the fight against climate change, which is highly likely to resonate with young audiences although all age groups would like to see drivers free to race without intervention from stewards unless deemed necessary.

Re-introducing more than one tyre supplier also attracted support from fans although the popularity of this idea saw further decline after initially attracting 70.6% of support in 2015, which fell to 55.5% in 2017 and now down to 38.5%, suggesting that Pirelli might be winning sceptics over with more competitive tyres.

Sprint Races meanwhile were adjudged by 6.7% of fans as a marginal improvement to the overall spectacle of race weekends, but there is very little desire to see Sprint Races at every round in coming seasons with 51.5% of fans rejecting the idea of reverse grids.

With F1 seasons getting longer with the sport set for a marathon 23 race calendar in 2022, fans who participated in this survey iterated a clear preference of nine races which should be retained at any cost.

Monaco, Monza, Silverstone and Spa Francorchamps were all considered untouchable given their history across seven decades of F1, dating all the way back to the very first season in 1950.

Five races proved highly popular with fans but not entirely iconic; Australia, Brazil, Canada, Japan and USA but Coronavirus Pandemic is thought to have skewered their popularity to some extent, with all five races cancelled in 2020 with only USA and Brazil returning in 2021.

Out of circuits introduced this decade, respondents rated Azerbaijan, Abu Dhabi and Singapore as their preferred races, ahead of places like Bahrain, Russia and China with the latter two races even proving less popular than Miami which will host its’ first F1 race next season.

For trackside spectators, good viewing points, pitlane walkabouts, easy parking facilities and strong support races were ranked as the most important factors in attending races, despite fewer than 20% of respondents in countries with a F1 event actually attending race weekends with less than 13% attending foreign races.

Covered grandstands and increase in on-track demonstrations also feature amongst influences for race-attending fans, with many not bothered about gaming zones or music concerts.

Ticket prices also were an issue for fans with many respondents stating that three-day race weekend ticket prices below £85.36 would be good value and a reasonable price maximum would be £105.93 with £177.77 rated as expensive and prices above £251.77 being judged as too expensive.

These responses consequently highlights how important it is for circuits to demand fans’ needs from facilities to entertainment and reasonable ticket prices, especially in light of the pandemic financially hitting many families around the world.

F1 bosses meanwhile need to acknowledge how crucial it is to retain popular races and potentially seek to cut down on trips to less popular countries, with Russia and China considered highly unpopular with F1 fans.

The survey also found that F1’s brand popularity is also continuing to improve with many respondents summing the sport up in the five most popular words consisting of; exciting, competitive, entertaining, technological and expensive.

Increased excitement and competitivity will be down to an increase in unpredictable races packed with competitive battles across the grid which excite fans on top of an entertaining close title fight between Verstappen and Hamilton this season.

F1 also continues to evolve technologically with teams creating new parts in order to make their cars go quicker, as evidenced by Red Bull, McLaren and Williams’ improvements in recent seasons through hard work and improved car technology for their drivers which is reflected in their improved popularity.

Expensive meanwhile continues to be banded around due to various costs from the car parts to tickets at certain races and the issue of pay-drivers like Nikita Mazepin and Marcus Ericsson, which seems to be a constant theme in modern F1.

The study also found that fans believe that F1 continues to have pioneering technology, fastest cars and drivers complete with exciting racing, which is also boosted by Liberty Media’s takeover with increased commitment to enhance digital output as evidenced by diverse audience reach methods.

These responses therefore are heartening for F1 bosses because it highlights that many fans continue to see F1 as an enjoyable sport, especially following an immensely competitive season this year where technology has been key to the excitingly competitive entertainment.

If there is one issue then it surely has to be the costs element because car parts and tickets for various race weekends are still quite expensive for working-class fans, whilst merchandise also are quite high-priced compared to alternative sports and is where F1 needs to lower costs to attract new working-class fans.

In summary, F1 shouldn’t have much to worry about moving forward because there is evidently a rise in young followers, as evidenced by the huge popularity of rising talent in Verstappen, Norris and others at a time when the old guard of Hamilton, Ricciardo, Vettel and Alonso are in their twilight years.

Team popularity will however often depend on overall performance of teams on track from season to season as well as their engagement with fans across various platforms like Social Media for example, although dominance can be a turnoff as highlighted by Mercedes’ slump in popularity.

F1 though should be concerned by the ‘expensive’ tag because that phrase does cover various parts of the sport from car technology to tickets to merchandise, yet can also be linked in with the increased switch to Pay-TV coverage which in turn limits FTA exposure across linear channels and radio.

Budget caps though should help alleviate criticism of the cost of car technology but work does need to be done in conjunction with race organisers to make ticket prices more accessible for fans, especially when many will likely be forking out on petrol, transport, hotels and food & drink during race weekends too.

Those aspects also are likely to be influential in whether working-class supporters can attend a Grand Prix weekend on top of ticket prices, which certainly could play a part in why less than 20% of fans in countries hosting a race choose attend their home race.

Merchandise prices also could do with being looked into because there are some steep pricings on certain products like caps for example, which are £30 or higher compared to ordinary caps across normal retailers which are considerably cheaper.

With the media industry continuously evolving with more digitalised options available, F1 is well placed to capitalise on an expansive reach across various demographics but bosses must consider how best to retain older fans who are used to old-fashioned media of FTA TV and Radio whilst continuing to adapt to a digital era.

It is also heartening to see that fans across all age groups have recognised that there is a core set of races steeped in history which should be kept on race calendars at all costs, when it is easy for young fans to possibly favour the more modern circuits which can produce dull races but have excellent scenery.

Now the big task for F1 lies in how they respond to the survey’s results and implement actions to meet fans’ feedback and expectations in coming years, which promises to be interesting given their reported desire to push ahead with reverse Sprint races next season against fan wishes.