Following a blockbuster takeover by a Saudi Arabia led consortium, here is a look at five players who Newcastle United could look to sign within the next two transfer windows.

With a mega rich consortium having completed a £300m takeover of Newcastle United last week, questions are circulating over the managerial position amidst fantasies of signing players like Harry Kane, Philippe Coutinho and Alisson for example.

The new Club Board though have iterated that they’re adopting a long-term approach but there is certainly opportunity for the club to make bold statements across the next two transfer windows in order to improve the current squad.

Now, here are five potential players who could well be on Newcastle’s radar across the transfer windows in January and next summer.

Although Newcastle do already have two top goalkeepers in Martin Dubravka and Karl Darlow, both players are now in their early thirties, whist Freddie Woodman and Mark Gillespie just lack the quality needed to become a top goalkeeper under the new ownership.

It therefore wouldn’t be much of a surprise if Newcastle were to make a swoop for a high-quality goalkeeper and Alphonse Areola would fit the bill, having fallen out of favour at PSG and boasts Premier League experience after impressing at Fulham last season on loan.

Areola though is now at West Ham on loan but if Newcastle’s new owners want to freshen up their goalkeeping selection, Areola feels like the ideal fit for a reasonable price, especially given his £12.6m value at 28 years old and a deal could easily be struck to end his loan stint in East London early.

The PSG goalkeeper also boasts a proven track record of success after winning numerous trophies in Paris and was part of France’s 2018 FIFA World Cup winning squad, meaning that Newcastle fans would gain a top yet undervalued goalkeeper.

Newcastle currently boast a central defence with the average age of 29.5 years-old which will need replacing within the next few years, in turn potentially making that aspect of the pitch a likely area of immediate concern given the Magpies’ defensive issues with just one clean sheet all season.

Bournemouth’s Lloyd Kelly therefore feels like a clear obvious signing who the club can slowly build their defence around in coming years if think long-term, especially because the club is unlikely to attract players like John Stones and Fikayo Tomori within the next two years at least.

Kelly also has been entrusted by Scott Parker this season at Bournemouth as captain in 10 of 12 matches in all competitions, which demonstrates just how promising the 23 year-old is as a leader as well as possessing the ability to influence play within low and high defensive lines.

Although Kelly endured a difficult first season of Premier League football with Bournemouth in 2019-20 due to injuries, he has since matured into a top future talent who looks ready for a top-flight return and would certainly provide Newcastle with a tasty defensive project within their wider plans for the future. 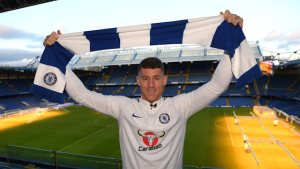 Newcastle’s midfield is quite a tricky enigma because the players within that particular area are of strong quality, yet just lack that sharpness needed to convert their chances into goals which is currently their biggest weakness.

On that particular note, I feel that Newcastle can forget about quality midfield signings until progress is made, although Ross Barkley would be an ideal step after falling from favour at Chelsea because I can see him being someone who can help boost Newcastle’s midfield goal threat given his talents.

Barkley’s particular style of pace and power combined with Joe Willock’s quick runs would also be of huge midfield benefit for Newcastle in terms of attack, especially if they clicked quickly because I can see them causing serious issues for oppositional defences with their passes and movement on the ball.

Add in the fact that Barkley has scored just once in six appearances for Chelsea across last two seasons – either side of a positive loan stint at Aston Villa, he surely should be worth a look in the January transfer window if the right manager is in place at St James’ Park.

With only Callum Wilson looking a consistent goalscoring threat up front for Newcastle as Joelinton and Dwight Gayle lack consistency, I wouldn’t be shocked if the consortium’s first priority amongst the playing squad is to hire a solid reliable goal scorer.

Mauro Icardi therefore fits that bill because he has proven himself as a solid striker when given the game time, yet has never really been the in-favour striker even after Edinson Cavani departed for Manchester United last season.

Icardi’s goal tally of 13 goals in 28 appearances last season is also incredibly similar to that of current Newcastle striker – Callum Wilson who netted 12 goals in 28 appearances, which offers huge opportunities if those two were able to click up front and cause serious attacking issues for oppositional defences.

In fact, Icardi would be worth chasing in January even if Newcastle are still in a relegation scrap because he and Wilson together in second half of season could be huge, especially in terms of pushing for survival and laying foundations for further progress next season.

Although Newcastle’s midfield is currently strong, their right flank looks the weakest despite Jacob Murphy’s improvements this season which could well open up the opportunity for reinforcement because Angel Di Maria is available on a free transfer next summer.

Admittedly, Di Maria’s first spell in English Football didn’t go to plan following a difficult slump in form during 2014-15 season at Man Utd, yet the 33 year-old has successfully regrouped himself at PSG across last seven seasons.

Age though could be seen as an issue given that Di Maria will be 34 years-old next summer but from Newcastle’s perspective, he would certainly be a huge free transfer who could help boost their right-flank quality whilst enabling the club to financially invest in other aspects of the squad.

If Icardi also joined the Magpies then him and Di Maria would represent solid progress in improving Newcastle’s attacking options for at least next two seasons, alongside a current selection of solid talent in midfield and attack.