As Formula One prepares to return to Imola ahead of the 2020 Emilia Romagna Grand Prix, we look back at a race that arguably began the most bitter rivalry in the sport – 1989 San Marino Grand Prix.

This race saw a spectacular crash on top of the beginning of a fierce rivalry which still divides fans to this day, as McLaren arrived with newly tested aero, suspension and brake parts after losing the Brazilian GP to Ferrari’s Nigel Mansell.

Practice was dominated by the McLarens with Alain Prost heading Ayrton Senna in both practice sessions with no more than three tenths of a second splitting the pair.

Riccardo Patrese was meanwhile within the top four throughout both sessions as he finished FP1 behind Ferrari’s Gerhard Berger in fourth before finding himself third in FP2 and 1.236 seconds off Prost’s pace but ahead of Mansell and Berger.

Berger was fastest in Friday Qualifying with a 1m 42.781 but times fell throughout the second Qualifying session on the Saturday as Senna ultimately claimed pole with a 1m 26.010, which was 0.225s quicker than Prost to secure McLaren a front row lockout as their upgrades paid dividends.

Out of the fellow British drivers, Arrows’ Derek Warwick was 12th quickest ahead of Martin Brundle, Johnny Herbert and Jonathan Palmer who qualified in 22nd, 23rd and 25th positions respectively. 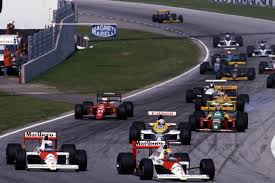 Pre race, Prost and Senna had an alleged “Gentleman’s agreement” that whoever seized the lead into Tamburello would go unchallenged throughout the remainder of the race.

Senna got the cleanest getaway to lead Prost who found himself fending off Mansell who soon fell back but the race was red flagged on lap four after Berger suffered a mechanical failure which sent his Ferrari slamming into the concrete wall at Tamburello, dispersing fuel across the car before catching alight into flames.

Marshals were soon at the scene and quickly put out the blaze whilst Berge escaped with broken ribs and second degree burns which forced him to skip Monaco Grand Prix before returning in Mexico.

Both Lola-Lamborghini cars of Phillipe Alliot and Yannick Dalmas had retired on the opening lap with electrical issues whilst March’s Ivan Capelli had spun off on the second lap.

Once the race restarted, Prost got the better getaway to lead Senna who felt that he should of been in the lead as per their agreement, forcing the Brazilian to make a pass on Prost into Tosa corner to regain his lead.

Pierluigi Martini suffered a gearbox failure on lap seven to end his running just a lap after Grouillard was black flagged and disqualified due to being illegally worked on during the red flag period.

Up front, Senna continued to lead Prost whilst Mansell, Patrese and Nannini found themselves scrapping for third but shortly after Stefano Modena spun off on lap 20, Patrese’ engine failed with Mansell soon following suit when his gearbox gave up.

Piquet also fell foul of engine trouble mid-race before Mauricio Gugelmin suffered a transmission failure on lap 40 in his March-Ford car, whilst Luis Perez-Sala spun off on lap 44 before Brundle became the final retirement on lap 51 with a fuel system issue.

Back up front, Senna continued to lead Prost as both McLarens lapped the entire field but Prost suffered a spin on lap 42 which ultimately allowed Senna to cruise to victory by 40.225s from Prost, as Nannini finished third ahead of Boutsen, Warwick and Palmer of whom had climbed from 25th on the grid to claim the final point.

Post-race, Prost felt that Senna had broken their agreement after the restart by passing him for the eventual win, whilst Senna argued that because he had led from the original race start, it meant that he should of and ultimately took victory beginning their bitter rivalry until Prost retired in 1993.