Ferrari have announced that Sebastian Vettel will part company with the team at the end of the 2020 F1 season.

This announcement comes after a breakdown in talks between Vettel and Ferrari over a new deal, with his current contract set to run out at end of this campaign.

Speaking of his decision to leave Ferrari, Vettel revealed “…that there is no longer a common desire to stay together…” with Ferrari beyond the end of this season due to the fact that “it’s vital for all parties to work in perfect harmony” within F1.

He also stated that “Financial matters have played no part in this joint decision” in regards to rumours of differentiation of value in contract talks between him and Ferrari, because it is “…not the way I think when it comes to making certain choices…”.

The four-time world champion also refused to rule out retirement, saying; “What’s been happening in these past few months has led many of us to reflect on what are our real priorities in life.

One needs to use one’s imagination and to adopt a new approach to a situation that has changed. I myself will take the time I need to reflect on what really matters when it comes to my future.”

Vettel has meanwhile confirmed that his “… immediate goal is to finish my long stint with Ferrari, in the hope of sharing some more beautiful moments together to add to all those we have enjoyed so far.”

Ferrari Team Principal, Mattia Binotto paid tribute to Vettel by praising his “great professionalism and the human qualities…” of which he displayed over his five seasons at Ferrari so far.

Binotto also confirmed that this decision was one that both team and driver felt “… is for the best” and “was not an easy decision to reach, given Sebastian’s worth as a driver and as a person.”

The Italian also feels that there is a “…common and amicable belief that the time had come to go our separate ways in order to reach our respective objectives.”

Binotto concluded by confirming his belief that Ferrari “… can still get a lot out of this unusual 2020 season.”

Charles Leclerc has paid tribute to his teammate on Twitter, saying; “It’s been a huge honor for me to be your team mate. We’ve had some tense moments on tracks. Some very good ones and some others that didn’t end as we both wanted, but there was always respect, even though it wasn’t perceive this way from the outside.

“I’ve never learnt so much as I did with you as my teammate. Thank you for everything Seb.”

What Next for Ferrari? 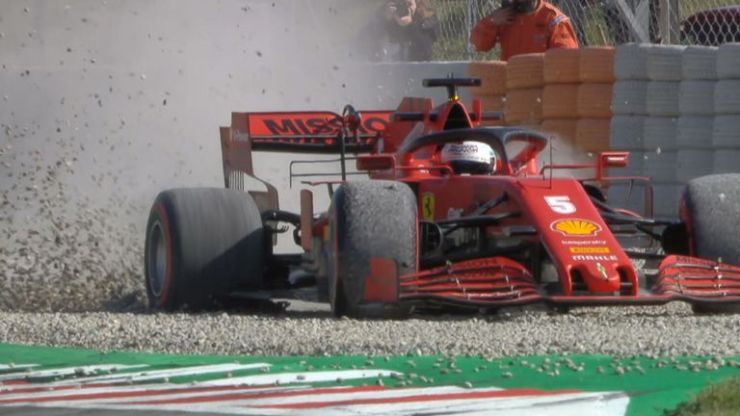 Ferrari now face tricky questions over its future amidst constant threats of quitting the sport in recent years, as F1 now arrives at a crossroad concerning its future.

Bosses at Maranello have long been favourable of a number one-two driver system which would influence its decision in who replaces Vettel to partner Leclerc, with McLaren’s Carlos Sainz amongst the frontrunners alongside Ferrari juniors – Callum Ilott and Mick Schumacher of who both are racing in Formula Two this season.

Experience however has often been a key component in Ferrari’s driver selections of recent seasons, potentially putting Daniel Ricciardo and Lewis Hamilton in the frame, of which both don’t have new deals lined up with Renault or Mercedes respectively beyond this season.

Full analysis of potential driver replacements can be found here.