With attention firmly on the lunchtime game, there are six further matches being played tomorrow.

Highlights include; Crystal Palace v Chelsea and Watford v Arsenal amongst others.

Burnley enter this clash in fine points, having taken 12 points from a possible 21 so far.

Their home form this season however has been worrying with no victory so far. West Ham however are yet to win on the road so looks like an evenly matched game.

To add extra detail to my view, both teams have scored 85.7% of their goals in opposite halves.

Burnley have netted more in the first half but the Hammers rule the net after half time.

Either way, expect goals because only one top flight meeting has finished 0-0 between these sides (February 1928).

Ultimately, I can see the victory drought at Turf Moor ending here.

Crystal Palace fans will be wishing that this fixture was in reverse given their start so far, especially at Selhurst Park.

NO points, NO goals and NO strikers is what the Eagles have entering this weekend.

Quite frankly in my opinion, this will be a total walkover for Antonio Conte and his Chelsea team (even with just two central midfielders) given the above problems for Palace.

Manchester City could enter this game needing a win if their city rivals win on Merseyside at lunchtime.

Stoke however are no pushovers against big teams so will push the Citizens hard.

Both teams tend to score in the second half but the Potters are yet to score a first half goal.

That will have to change at the Etihad if want to leave Manchester with a point.

City definitely look like could win this easily because they dominate the whole pitch and have averaged 3.67 goals at home from 7.33 shots on target.

Add in their 19 match unbeaten home run then this looks like could become 20 home matches unbeaten.

This lower table clash could be quite interesting as Swansea look to climb out of the relegation zone.

Huddersfield will however want to get things back on track after being struck down by ‘August manager of month’ curse.

There is no top flight history but the Terries won their last two trips to Swansea.

Both teams don’t tend to score well with the Swans only averaging 0.33 goals at home so far. Huddersfield have however averaged just one goal from their three away games.

That might just swing this match the way of Huddersfield for my likings.

Despite being set to break the record for the biggest Premier League attendance, fans shouldn’t expect a thriller.

Both teams are yet to net in the first half so are probably in for a solid if settled opening 45 minutes. 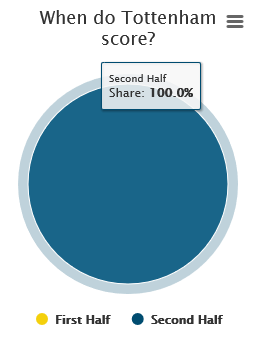 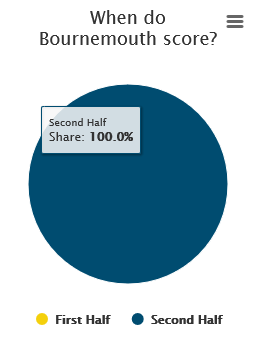 After that, we should see goals flowing but Tottenham have struggled to score at Wembley as history shows.

Out of ever Premier League team, Spurs have averaged the most shots at home so far this season (24).

The goal average however tells a different story with 0.67 goals out of an average of 6.33 shots on target.

Nearly one year ago, this fixture was played at Dean Court and the Cherries were fantastic in defence that day.

A repeat of that and it will be points shared here.

Watford will fancy their chances of keeping up their best ever start to a Premier League season here, against Arsenal.

The Gunners have however won their previous five league trips to Vicarage Road so will be tough competition.

Watford have scored 66.7% of their goals in the first half but at least that is a better stat than of Arsenal, who are yet to score away from the Emirates.

One stat that will worry Arsene Wenger most is the goals on target average because the Gunners have averaged 9 shots on target per home match. On the road, that sharply drops to 2.67.

Their fouls average goes up from 9.5 to 11.67 so if the Hornets can frustrate them, expect a tough match.

In the end, I think Watford will edge this because Arsenal seem to struggle away from home.

Here at Sport Grill, me and Jake Self are going head to head predicting games. Here is how things stand after the previous round of games along with the rules.
Correct score – 3 points
Correct result – 1 point
Incorrect result – 0 points